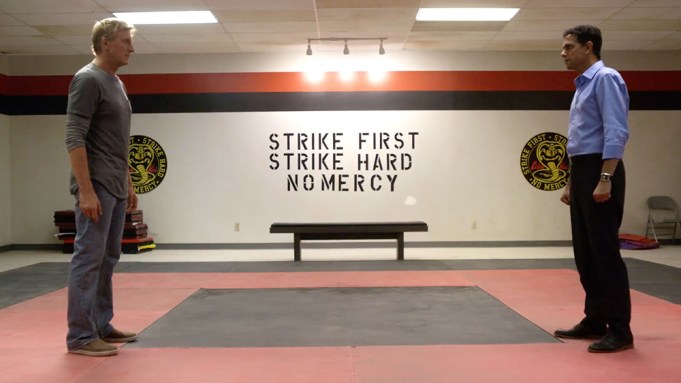 Thirty-four years have passed, but the rivalry between Daniel LaRusso and Johnny Lawrence remains in the trailer for YouTube Red series “Cobra Kai.”

The streaming platform released the trailer for the upcoming “Karate Kid” spinoff, where Ralph Macchio and William Zabka will reprise their roles as adversaries.

The clip opens with a scene from the final “Karate Kid” battle, when Macchio’s Daniel LaRusso defeats Zabka’s Johnny Lawrence before flashing forward to present day. While Daniel is thriving with his own car dealership, Johnny appears to be struggling until he witnesses a teenager being bullied by a group of students.

Johnny defends the helpless teenager and decides to reopen karate dojo Cobra Kai. He then becomes the teenager’s sensei, but Daniel isn’t on board. “He thinks he can bring Cobra Kai back to the valley. Not on my watch,” Daniel says.

The preview ends with Daniel seemingly preparing for a fight and telling Johnny they aren’t done.

The series is written and executively produced by Josh Heald, Jon Hurwitz, and Hayden Schlossberg. It is produced by Overbrook Entertainment in association with Sony Pictures Television.

The show debuts at the Tribeca Film Festival on April 24 before premiering on YouTube Red on May 2. Watch the trailer below.