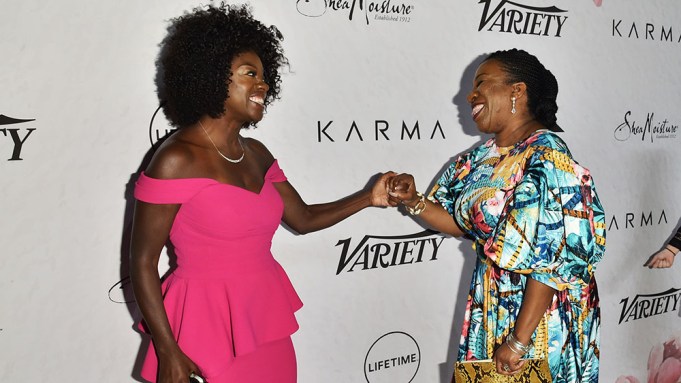 While introducing Me Too founder Tarana Burke at Variety‘s Power of Women luncheon on Friday, Viola Davis gave a passionate speech on how rape disproportionately affects black women and how Burke’s movement is helping the victims.

While introducing Burke to the stage, Davis called her a hero. “A hero is a person who lives a life bigger than themselves.”

She went on to name the many lasting effects of sexual assault, including depression, eating disorders, and suicidal thoughts, saying that rape is often described as a “death.” “Usually that’s what it becomes. ‘Let me tell you about the day and the time that I died.’ She leaves her body, and the journey to becoming a survivor, an overcomer, to bringing your predator to justice, is a long road,” Davis said.

“And so if you can imagine how horrific that is, then also imagine that a black woman is 66% more likely to be assaulted again if she is raped before the age of 18,” she went on, noting that 77% of women who are sex-trafficked are women of color, “which is why, usually, nothing is done about it. More than likely, they’re not going to seek therapy because they’re going to be stigmatized. Stigmatized as being dirty. Stigmatized as being overly strong. Stigmatized as being not worthy at all.”

She then moved to Burke, who, Davis said, made it her goal to be the voice of those victims.

“If you can imagine, if you can wrap your mind around it, there is a rung lower that people see than being a woman,” Davis said. “And it’s being a woman of color.”

But, the Oscar-winner went on, Burke has helped give a new life to women affected by sexual assault, allowing them to “own their story.”

“Tarana has owned her story,” she continued. “And she’s allowing these young girls to own their story. And to still, despite the trauma, despite the heartache, despite the fact that something was taken from them, that day, that moment, that they could still lead a life of value. And my god, if that is not a golden lasso and a cape, I don’t know what is.”

In her recent interview with Variety for the Power of Women issue, Burke said Davis was one of the first to donate to the Me Too movement. Burke said Davis asked, “‘Has anybody given you money?’ I was like, ‘No we’re small operations.'” Burke continued, “She was like, ‘I’m giving you some money,’ and she’s gotten other actresses to give us some money.”