Tarana Burke on Me Too: ‘It’s a Mistake to Think of This as a Moment’ 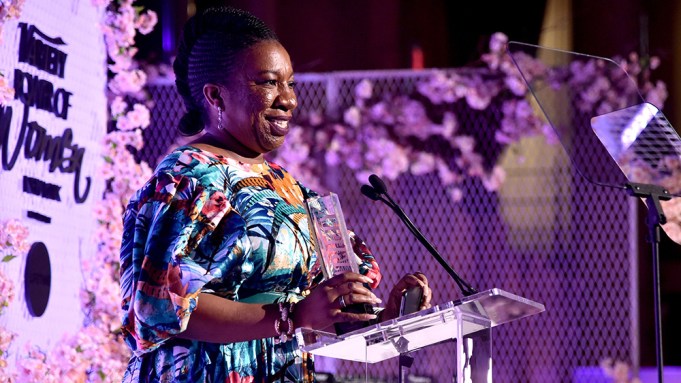 Me Too founder Tarana Burke spoke about her platform that has transformed into a movement at Variety‘s Power of Women event in New York Friday morning.

“These past six months have been like something out of a movie,” Burke said. “And every day that I wake up and folks still hear what I have to say, I’m really surprised and motivated.”

Burke, who started Me Too in 2006, said she could have never dreamed she would ever see a national dialogue about sexual violence in this country.

“It is a mistake to think of this as a moment,” Burke said. “Movements are long, and they are built over time. Movements are made from moments.”

Burke recognizes the power Me Too can hold on the community.

“That’s why I’m so desperate to change the narrative about the Me Too movement before it’s too late,” she said. “Folks think it’s about naming and shaming, about taking down powerful men. But they’re wrong.”

Instead, she says, the movement should focus on survivors.

“With two words, folks that have been wearing the fear and shame that sexual violence leaves you with like a scarlet letter, are able to come out into the sunlight and see that we are a global community,” she said.

She continued, “In my work, we strongly discourage victim language. It pushes back on the false notion that we need or want sympathy or pity. We have already survived some of the worst things possible, and we’re still here. It didn’t kill us, it made us stronger.”

During her speech, Burke also shared that she previously went to breakfast with tennis legend Billie Jean King, who gave $100,000 to Me Too.

“Once I stopped crying and jumping for joy, I said, ‘I cant believe you’re doing this,'” Burke recalled. “And she said, ‘You believe anything is possible, and I believe you..”

The Me Too movement is raising funds to “build something that doesn’t exist” — a global community, both online and offline, to help guide survivors of sexual violence, Burke told Variety for its Power of Women issue this week.