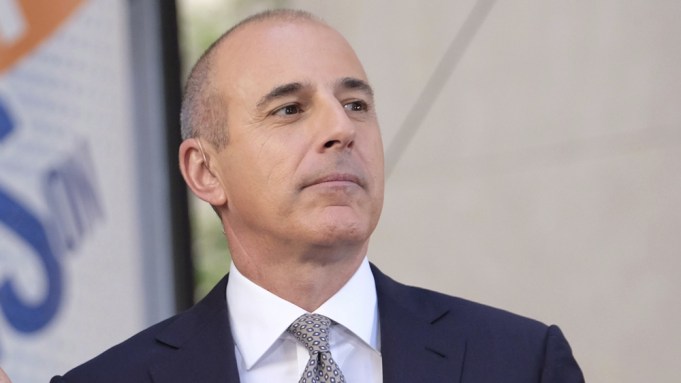 Ari Wilkenfeld, the civil rights lawyer who represented the victim of sexual misconduct whose complaint got Matt Lauer fired, is calling on NBC News to hire an outside firm to investigate a growing number of sexual harassment allegations made by current and former employees.

In the days after Lauer was fired for inappropriate behavior last November, NBC News chairman Andy Lack said that NBCUniversal’s legal team would be conducting an inquiry. He also pledged sexual harassment training for employees and “cultural assessment” sessions within his organization.

“The problem is not just the superstar harassers, it’s the top management,” Wilkenfeld said in a statement to Variety. “The man who runs NBC News today oversaw a news division in which widespread harassment of women was allowed to occur, has appointed himself responsible for investigating and solving the problem. One important reason companies hire outside investigators is to send a strong signal to their own employees that the company wants to get to the root of what happened and is prepared to accept responsibility. Sadly, it seems that NBC has chosen to go in a very different direction.”

Wilkenfeld’s latest client is Linda Vester, a former NBC News anchor who in interviews with Variety and The Washington Post last week said that Tom Brokaw groped and forcefully tried to kiss her in the ’90s. Brokaw has denied these allegations, stating that his meetings with Vester were “brief, cordial and appropriate.”

On Friday, Lack issued a memo to his staff with an update on NBCUniversal’s review of Lauer, revealing the investigation “is nearing its conclusion, and we will have finding and further steps to share with you as soon as next week.” Lack noted that the investigation was being conducted by Kim Harris, general counsel at NBCUniversal.

Several employees interviewed by Variety, who asked to speak under the condition of anonymity, have expressed skepticism about the merits of a investigation conducted by NBC about who knew what and when. “How are they supposed to be investigating themselves?” one employee asked.

“I think it is ironic and quite sad that currently, victims at NBC News are apparently even more intimidated about exposing wrongdoing than they were when Linda was being harassed,” Wilkenfeld said, about morale where some staffers say they distrust management. “I understand that the culture of fear is apparently worse than it was before Lauer’s termination.”

Last week, The Washington Post uncovered 12 women who identified themselves as victims of sexual harassment while working at NBC News, which included three cases against Lauer. Many of these accounts were anonymous. Vester’s story about Brokaw was on the record.

Brokaw wrote an email defending himself to his NBC colleagues, which was later published in press reports. Since then, more than 100 women from the news division including Rachel Maddow and Andrea Mitchell have signed a letter defending Brokaw.

Wilkenfeld has criticized NBC News before. In December, during an interview with “Today,” he said the company failed his client, an anonymous employee who came forward with serious complaints about Lauer, by leaking information about her identity both internally and to the media. Lauer, who has denied any wrongdoing, was swiftly fired by NBC.

In his most recent memo, Lack said, “We take allegations such as these very seriously, and act on them quickly and decisively when the facts dictate.” Asked if NBC had reached out to Vester to investigate the charges against Brokaw, Wilkenfeld replied, “No.”