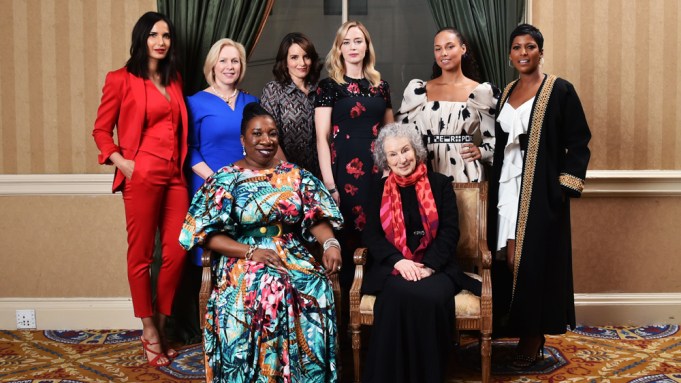 It’s not a moment. It’s a movement.

Honorees and speakers at Variety’s fifth annual Power of Women New York luncheon hailed the array of activists who have spurred a seismic shift in attitudes about the scourge of sexual misconduct in the workplace. The roomful of prominent women in entertainment and media were called on to use their voices, their power, their pocketbooks, and their passions to drive the social change they want to see in the world.

“Movements are made from moments,” said Tarana Burke, founder of the #MeToo social media campaign last fall that was the spark for so many women to share their stories of grappling with sexual assault. “I never believed we’d be having a sustained national dialogue about sexual violence in this country but here we are. Anything is possible. Even in these gloomy political times, I feel like anything is possible.”

Burke’s appearance electrified the room, with a little help from a powerful introduction by Viola Davis, who offered chilling statistics about the rate of sexual violence against women of color.

“Tarana has made it her mission to be the voice of women who are deemed unworthy,” Davis said, citing Burke’s work with her Brooklyn-based non-profit org Girls for Gender Equity. Davis, a former Power of Women honoree herself, compared Burke to a real-life superhero. “If that’s not a golden lasso and a cape, I don’t know what is,” Davis said.

Burke emphasized that the true power of the #MeToo experience comes from harnessing the energy it has unleashed to foster lasting changes in laws and cultural norms. “It’s a mistake to think of this as a moment,” she said. “Movements are long. Let’s not squander this moment by allowing others to define it for us.”

Burke and others urged women in the audience to strongly consider running for office. Sen. Kirsten Gillibrand (D-N.Y.) said a turning point came in October when the New York Times published its expose of sexual assault allegations against movie mogul Harvey Weinstein going back decades. That story “lit a match on a fire that is still burning,” she said. “When women decide to own their ambitions, it changes the world.”

Bee, host of TBS’ “Full Frontal with Samantha Bee,” had no shortage of material for her opening remarks. She took a few off-color shots at President Donald Trump, but the line that landed the biggest laugh was aimed at Vice President Mike Pence, who famously said during the 2016 presidential campaign that he will never have dinner alone with a woman other than his wife. Surveying the room, Bee quipped: “I can’t help but feel inspired and totally safe knowing that this is Mike Pence’s personal hell.”

Blunt, who attended with her actor-director husband John Krasinski, was feted for her support of the Malala Foundation spearheaded by Malala Yousafzai, the Pakistani activist for education for women and girls. Blunt’s fellow actor and Brit Emily Mortimer was on hand to present the award.

Blunt’s connection to Yousafzai’s cause is rooted in her experience as the mother of two young girls. In her daughters, she saw first-hand the importance of education in a developing brain. “They yearn to learn. They crave it. And in return the world lights up for them,” she said.

Atwood was hailed for her legacy as a feminist writer, and a prescient one at that. Ronan Farrow, the investigative reporter who also broke ground on reporting on shocking Weinstein allegations, confessed he was thrilled as a “literary nerd” to be tapped to present Atwood’s kudo.

Atwood’s 1985 novel “The Handmaid’s Tale” was adapted as a drama series for Hulu just in time for issues of gender equality to become a roaring subject of conversation around the world. “Right now it’s the best of times and the worst of times for women,” Atwood said. “Now is not the time to take anything for granted.”

Atwood noted that “Handmaid’s Tale,” for all its dystopian view of a future world where women are stripped of rights, ends on a hopeful note in which women-led resistance efforts triumph.

“Let us hope that this part of my fictional future does come true,” Atwood said.

After an introduction from “Good Morning America” anchor Robin Roberts, Keys stirred emotions by sounding the alarm on social justice and police brutality concerns for people of color.

“Stephon Clark. I say his name. Alton Sterling. Philando Castile. I will never stop saying their names,” Keys said, invoking the names of African-American men killed in encounters with police.

“That shakes me. It makes me angry,” Keys said. Her goal with Keep a Child Alive is to “channel that anger into action.”

Fey also cited eye-popping statistics as she was feted on behalf of her work with Reading is Fundamental. She got an exuberant intro from Erika Henningsen and Taylor Louderman, two stars of her latest endeavor, the Broadway musical “Mean Girls.” Louderman described Fey as “our boss and our personal hero.”

Fey became involved with the venerable literacy org when she became aware of the problems with reading comprehension that so many youths face. “We live in the richest country in the world,” Fey said. And still, “25 million children in the U.S. do not read with proficiency,” she said.

Fey cited her childhood love for books ranging from “A Tree Grows in Brooklyn” to “Black Beauty” to the tales of Babar the Elephant. “Stories are the best way to get children to see the world beyond them,” she said. “To this day I believe elephants can drive cars.”

Lakshmi was this year’s recipient of the Karma Award from Karma Automotive for her role in launching the Endometriosis Foundation of America. The organization advocates for medical research and offers support for women facing the debilitating disease connected to menstruation.

Lakshmi said she was told for years by doctors she would have to “deal with it” because there was no remedy, but in fact she wasn’t properly diagnosed until she was 37. Her experience underscores the gap in spending on medical research for conditions that affect women. “I was being penalized because I have a uterus,” she said. “If I was a man who couldn’t get it up there would be many treatments. And it would be covered by insurance.”

Hall was recognized with the Community Commerce Impact Award, presented by SheaMoisture, for launching the Tamron Renate Fund that aims to help victims of domestic violence and their families. She recounted the harrowing story of the murder of her sister, Renate, at the hands of her abusive boyfriend. Hall said her goal is to ensure greater awareness for families of the causes and ramifications of domestic violence.

With her own sister, Hall admitted, her attitude at the time was: “Why can’t you leave? What is wrong with you?” she said. When the boyfriend beat her sister at Hall’s home, she said, “I kicked him out. She let him back in and then I kicked them both out.”