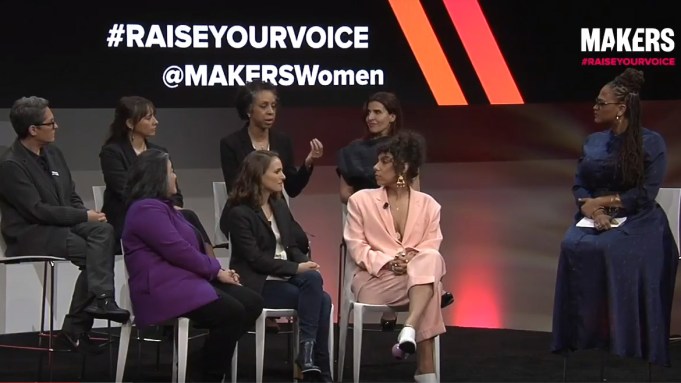 Time’s Up campaign member and former chief of staff to Michelle Obama Tina Tchen revealed that Time’s Up has raised $20 million for its legal defense fund and received 1,000 requests for help during a Time’s Up panel at the 2018 Makers Conference.

The panel also included music video director Melina Matsoukas, entertainment lawyer Nina Shaw, CAA motion picture agent Maha Dakhil, and Tchen. It was intended to shed light on what the Time’s Up initiative is and the goals of the campaign.

Jones explained that the cornerstone of the Time’s Up movement is intersectionality, which means addressing the way a person’s gender, race, socio-economic class, sexuality, and other characteristics can result in different forms of or circumstances surrounding the treatment they experience in the workplace.

“There is no change unless you bring everyone along who has been marginalized,” she said.

Tchen added that one of the main goals of Time’s Up is to furnish lower-income women experiencing inappropriate workplace treatment with lawyers. She said that the $20 million dollars was raised in one month from 20,000 donors from across the country. In the same month, the campaign received over 1,000 requests for help.

“We didn’t want to be a group of people who got in a room and talked about the change we wanted to see made, we wanted to be part of that change,” Shaw said. “And it was so important for us to come out in our very beginning with an action-oriented item.”

Portman emphasized that working with so many other actresses, specifically, has helped her realize how many experiences they share, since according to her, the actress’s experience can be isolating — they’re often surrounded by a mostly male crew.

“How empowering it is to be in a room, to be on the same team, to say we refuse to be pitted against each other, there’s not only one spot, we’re gonna make room for all of us,” she said.

Watch the full panel discussion above. The panel begins around the 4:30 mark.