Tarana Burke on Hollywood, Time’s Up and Me Too Backlash 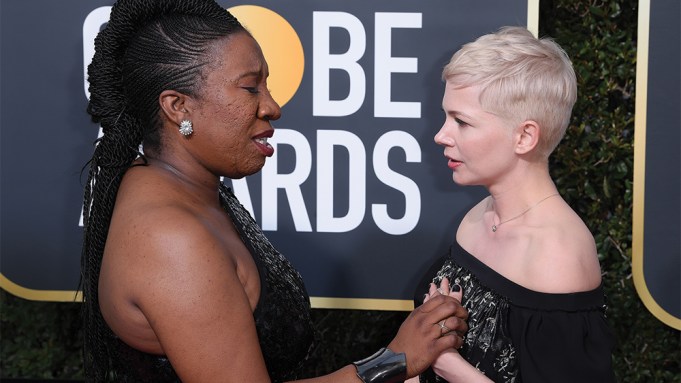 Tarana Burke is a lifelong activist who founded Me Too more than a decade ago — but the world didn’t know about the movement until Hollywood took notice.

And Burke isn’t mad about it.

Despite criticism on social media that Hollywood actresses have become the face of Me Too, glamorizing the movement at glitzy events like the Golden Globes where A-listers wore black as a symbol of solidarity on the red carpet, Burke says she isn’t surprised the power of celebrity catapulted her cause into the global conversation.

“I’m fine with that,” Burke says, in conversation with Variety for the annual Power of Women: New York issue, when asked about Hollywood shining a light on Me Too. “I understand why people are frustrated that it took celebrities for this to take off because in a perfect world, people would just care and would want to see this situation elevated to public issue, but that’s just not the reality that we live in,” Burke explains.

“We are a society that thrives off of celebrity culture, so it always takes something to break the ice, and if it takes celebrities coming forward, for me, I don’t have time to be annoyed that it didn’t happen in a different way,” Burke elaborates. “I’m just happy that it happened. I just think that it’s worth acknowledging that it took celebrities to make it happen, but I’m a realist — so how else would it happen to spark a national movement? I’m not mad and I’m not surprised.”

Here, Tarana Burke talks more about Hollywood’s role in the Me Too movement, Time’s Up and what’s next…

Were you surprised at how quickly #MeToo blew up on Twitter?

In a lot of ways, I was not surprised. I’m surprised in the sense that I could have not even imagined a reality when sexual violence would be at the forefront and survivors would have a voice. I’m still surprised about that. But I’m not surprised about the way in which it took off for people who have survived sexual violence because I’ve seen how it catches fire on a small scale — I’ve been in a room of 30 people and done a workshop or a talk, and I know how pervasive the problem is, so I wasn’t surprised at how quickly people related to it, but I’m certainly surprised that there has been a sustained national dialogue for six months now.

There has been some criticism on social media regarding Hollywood “waving the flag,” so to speak, to end sexual violence. What are your thoughts on Hollywood’s efforts toward the Me Too movement?

The women in Hollywood are very new to this. They were very fed up and felt like they had to do something, but they’re not activists, they’re not organizers — a lot of them are survivors of sexual violence, they are victims of sexual harassment, they have been subjected to the same patriarchy and misogyny that so many women across the world have been subjected to, and they recognize that their spotlight and visability could be useful.

Do you think that Hollywood taking a stand for Me Too resulted in positive progress for the movement?

Everybody has a lane. I don’t expect Hollywood actresses to figure out a solution to end sexual violence, no more than I expect a ground of plumbers to do it. I think that people in their capacity do what they can, so what we’ve seen in Hollywood is women and some men do what they can in their capacity. Can they do more? Of course they can, and I’m sure they will. I don’t work for Hollywood. I just have been given entry and access to this world, and in some ways, to help them think through what makes sense. But also the rest of us in the world who are not in Hollywood need to stop looking to Hollywood as the problem-solver. We have work to do ourselves. Whatever Hollywood does adds to it, but this critique of Hollywood’s work being a fad — so what? It won’t, but if next year, Times Up dissolved and all the actresses went back to doing their own thing — so what? At the time that they could do something, they did it and they contributed. I feel like critique is not useful when you’re trying to make progress. It’s frustrating because I can feel it impeding us.

You walked the red carpet at the Golden Globes. What did you think about the all-black dress code?

The thing at the Golden Globes was about visibility, and I thought it was thoughtful and it made a statement.

How did the idea come about to have activists like yourself join actresses on the Golden Globes red carpet?

Michelle Williams was thinking expansively when she decided to invite me. I thought, this is brilliant. We had a conversation when she first called and I said inviting me is great, but it could be seen as a novelty to have all these people on the red carpet and then have one activist, but what would it look like to have the red carpet flooded with all these women doing kick-ass work around the country? They were so open and so willing to learn and so eager to do something and to be so active. There was no pushback. And then they rolled out the red carpet, no pun intended, and made sure that we had a great experience and had agency in it.

What has your experience been like working with the women in Hollywood?

My work is for survivors of sexual violence. The women of Hollywood did not stand up and say, “This is my movement.” They stood up in a way that could have been to their detriment to tell their truth. They stood up and they said, “I want to speak, I want to be heard and I wanted to be believed.” That’s it. A lot of this happened when they were young and were starting out in this business. So I engaged them as survivors of sexual violence first.

The women in Hollywood have formed the Times Up movement, which has raised millions of dollars to end sexual harassment in the workplace. Is the Me Too movement working directly with Times Up?

Even though Me Too has been around for a long time, we’re still getting institutionalized, and they’re also in a moment of getting institutionalized. As much as I can help support that, I will, but I don’t want a conflation of the two things. Times Up is doing a dynamic thing that we’ve never seen before, but I’m also trying to build something that we’ve never seen. I know the women, I speak to them, I’ve met with them. They also have a very expansive vision that is not solely about sexual violence — the part that deals with sexual violence deals with sexual harassment in the workplace, which is very important, but they’re also dealing with pay equality and representation, and that’s not our work. Our work is solely focused on sexual violence. There are places where we dovetail, and we’ve been in conversation and they have been very supportive of me and our movement.

Do you believe all of the attention Me Too has gotten has resulted in real change yet?

What we’ve seen is a corporate response to this movement, which is like, “Oh, everybody is upset about Harvey Weinstein? Okay, he’s got to go.” That’s the corporation saying we want to separate ourselves from this person because we don’t want culpability. That’s not some altruistic gesture. And it’s also not the women doing with pitchforks and putting a target on someone’s back and saying we want to take you down.

Speaking of, many powerful men have said they believe the Me Too movement is becoming a “witch hunt.” Is there any credibility in that line of critique?

I think that we have to reframe the narrative of this movement. We have a very unique opportunity and the window will close at some point. It’s miraculous that it’s still open, but it will close at some point, so if we keep chattering about witch hunts on powerful men or how we date in the era of Me Too, that’s the wrong narrative. The only narrative should start and end with survivors. Period.

What other backlash have you seen to the Me Too movement that you don’t agree with?

The other critique is that this movement is turning into victims. I don’t even understand that. How am I turning into a victim for standing up and talking about something that caused me pain and trauma? That’s insanity. I’m a very logistical person, but I just don’t follow the logic there. However, I think there have been genuine critiques to this movement and genuine critiques are worthy of engaging. The critique about so much disclosure happening online without people having a way to process, that’s a genuine critique — that’s why the work we’re trying to do is to meet the demand of people that are saying they need help.

How do you believe we continue to keep the conversation going?

The immediate work is this narrative change. From the criticism to the victim-shaming to the false conceptions that it’s a witch hunt, we’ve got to shift from that. It is very important that there is a voice that is clear and consistent about where this movement should be going to move forward. Narrative change in this movement is so important because if we keep on talking about this movement in the ways that we’re talking about it, we’re going to lose an opportunity.

What’s next for the Me Too movement?

The work now is essentially the same work that we’ve been trying to do forever, but on a larger scale, and that is to build a digital community. Right now, if you Google, “I’ve been sexually assaulted and I need help,” it takes you to one website and it’s a great website and it has a lot of resources and a hotline, but there needs to be more. No one thing can meet all the needs of all these people. What I’ve seen in the voices of survivors who have been speaking up in the past few months is that people want resources to help with healing. Me Too is about what happens after you say the words, so it’s about making sure that the survivors know there is hope. It sounds cheesy, but hope saves lives, so when people realize that healing is possible and that the journey is long and arduous, but it’s possible, even just the knowledge of that is healing.