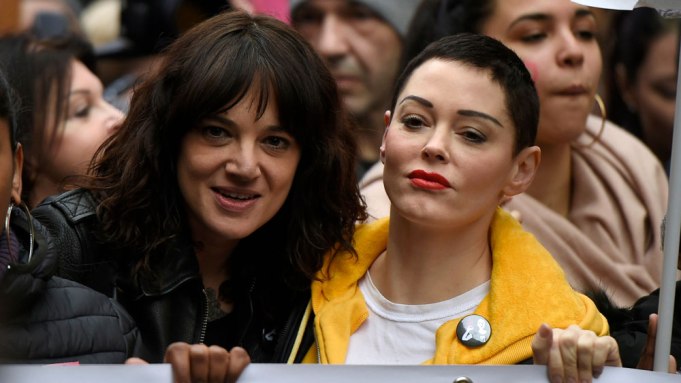 Following the death of Anthony Bourdain on Friday, Rose McGowan has released a lengthy statement asking the media and fans not to place blame on anyone for the famed chef’s suicide.

McGowan wrote that she was speaking on behalf of friend Asia Argento, who had been in a relationship with Bourdain since 2017. In the statement, the actress and activist said, “I know so many around the world thought of Anthony Bourdain as a friend and when a friend dies, it hurts. Many of these people who lost their ‘friend’ are wanting to lash out and blame. You must not sink to that level. Suicide is a horrible choice, but it is that person’s choice.”

She went on to detail the relationship between Bourdain and Argento, and how both struggled with depression, particularly this year, as Argento was one of many woman to bring harassment allegations against Harvey Weinstein. McGowan said Argento “did the work to get help, so she could stay alive and live another day for her and her children. Anthony’s depression didn’t let him, he put down his armor, and that was very much his choice. His decision, not hers. His depression won.”

She also says Bourdain reached out for help before his death, “yet he did not take the doctor’s advice.”

After calling for public support for Argento, McGowan concluded, “To the media and to the random commenter, Anthony would never have wanted Asia to be hurt, I’d like to think he would want us to have the collective conversation that needs to be had about depression. Blame is NOT a conversation, it is the shutting down of our collective growth. Which is where we are now. We have a choice as humans, shrink to our smaller, uglier selves, or be better and grow as only true Phoenixes can. I urge you to be that Phoenix.” She also provided suicide prevention hotlines for countries all over the world.

CNN, for which Bourdain hosted the popular food and travel series “Parts Unknown,” confirmed news of Bourdain’s death on Friday. According to the network, Bourdain was in France working on an upcoming episode of the show. His friend, French chef Eric Ripert, found him unresponsive in his hotel room.

Argento tweeted on Friday, “Anthony gave all of himself in everything he did. His brilliant, fearless spirit touched and inspired so many, and his generosity knew no bounds. He was my love, my rock, my protector. I am beyond devastated. My thoughts are with his family. I would ask that you respect their privacy and mine.”