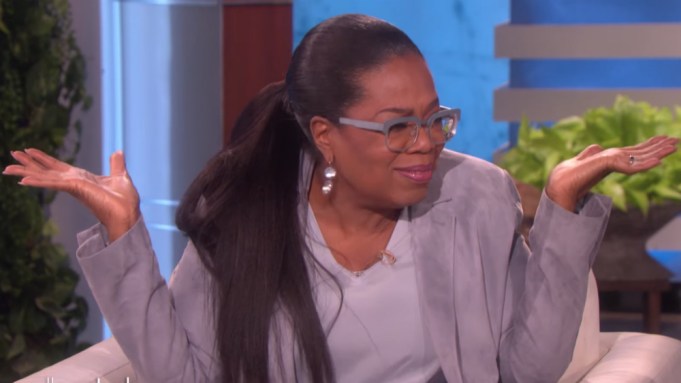 In a visit to “The Ellen DeGeneres Show” on Thursday, Oprah Winfrey responded to Donald Trump’s attacks on her recent “60 Minutes” segment, where he called her “very insecure.”

During Winfrey’s panel, she explored America’s division during Trump’s presidency. The segment came shortly after her powerful speech at the Golden Globes, which led many to speculate if Winfrey would run against Trump in 2020. Over the weekend, he criticized her on Twitter.

“The questions were biased and slanted, the facts incorrect,” Trump wrote. “Hope Oprah runs so she can be exposed and defeated just like all of the others!”

Just watched a very insecure Oprah Winfrey, who at one point I knew very well, interview a panel of people on 60 Minutes. The questions were biased and slanted, the facts incorrect. Hope Oprah runs so she can be exposed and defeated just like all of the others!

When DeGeneres asked about her response to the tweet, Winfrey shrugged and said she woke up and thought, “What?”

“What I actually really did was I went back and looked at the tape to see if there was any place that that could be true,” she explained to DeGeneres. “Did I feel like it was slanted or biased?”

She continued, “I went back and looked at every tape, I called the producer because what actually happened was when you do ’60 Minutes,’ you sit in a room with at least seven other people who critique the piece before you air it, before you do the introduction to it, and then they give you the critique. They critique every word and is this fair? You have this whole panel of people looking at whether it was fair.”

Winfrey said before the “60 Minutes” segment aired, she went through it, specifically looking for areas that might seem uneven between the Republican and Democratic view points.

“The first time I saw it I said, there’s something missing here from the conversation when I asked the question, ‘Do you care what other people think about America?” They only used the Democratic side. And I said I remember the guy Matt had said, ‘No, we’re the only people that are worried what other countries are thinking of us.’ And I said, ‘I think you should go back and put that in because it makes it more balanced.’ So, I was working very hard to do the opposite of what I was hate-tweeted about so, it’s okay,” she said.