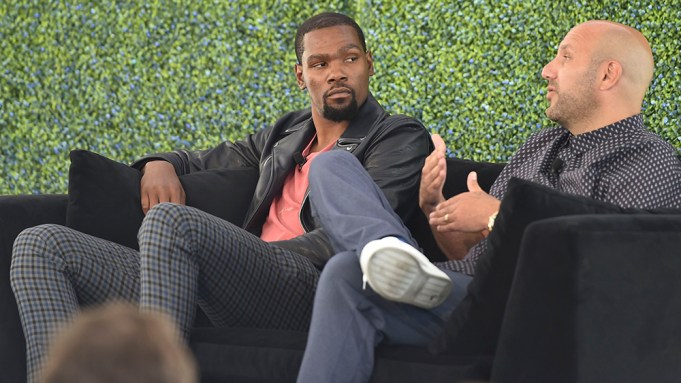 Golden State Warriors star Kevin Durant shared his off-the-court playbook for making his way through the media business in a keynote Q&A at Variety’s Sports & Entertainment Breakfast Thursday morning at the Beverly Hilton.

Durant explained that when it comes to projects for his production company Thirty Five Media, basketball is always going to play a central theme.

“I think the soul of it all comes from just loving the game, and so many different avenues come from that,” he said in a conversation with Variety’s co-editor-in-chief Andrew Wallenstein. “I mean, everything you have to muster up to become a basketball player — I think everyone could relate to that story. It’s always gonna be about basketball for me.”

Rich Kleiman, Durant’s partner at Thirty Five, added that their upcoming slate of projects is “all about that backdrop of basketball, which is what he loves and is what I love.”

That lineup includes “Q Ball,” a documentary about the San Quentin league for Fox Sports series “Magnify,” which Kleiman says is likely headed for release sometime this fall.

Durant became involved with the project after a visit to California’s San Quentin State Prison before his first year with the Warriors last season. He grew fascinated by the basketball league in which those incarcerated there competed, that was so close to where he played at Oakland’s Oracle Arena for the Warriors. He was so moved by the players’ stories that he signed on as an executive producer.

“The enthusiasm for basketball at San Quentin is something everybody needs to see and I’m looking forward to help tell that story. There are some great men who have done some unfortunate things, but basketball helps them get through what they’re going through right now.”

The project is the latest addition to the growing roster of productions in the hopper at Thirty Five Media. In addition to “Q Ball,” Thirty Five has landed a scripted series at Apple, “Swagger,” inspired by an early stage in Durant’s basketball career. Kleiman hopes the series will start to shoot in Los Angeles and Durant’s hometown of Washington, D.C., this fall.

“We partnered with Imagine Entertainment and Brian Grazer on this, and that was a very natural fit. The way we were explaining it all the time was that in some ways it was ‘Friday Night Lights’ for basketball. It was a coming-of-age story for 14-year-old kids in D.C. And behind that was the guy who created in ‘FNL.'”

He’s also carved a niche for himself at YouTube, where he’s the main attraction at his own channel. In addition, Thirty Five Media is a development partner with YouTube, including helping other athletes such as JaVale McGee and Nick Young develop content on Kevin’s channel and forthcoming branded content deals.

Kleiman shared how their initial goal with Durant’s platform was to communicate with fans and mirror the blueprint YouTube creators had done so successfully. “No athlete had done that before,” he said.

“Obviously my job during the season comes first, but as a professional athlete there’s also a lot of downtime that your body needs to rest, and I take advantage of that creatively when I can,” says Durant in an earlier interview with Variety. “Rich and I are constantly calling or texting each other with ideas for things we’re already working on or that we may want to pitch, and I rely on my team to update me regularly on where my input is needed as projects progress.”

While Durant says that he knows his lane and doesn’t necessarily contribute to the writing aspect of his projects, Kleiman, who previously served as VP and agent at Roc Nation Sports, has formed a close enough friendship with Durant to understand his production tastes. “Kevin gets a feel for what’s happening,” he says. “And if I know this isn’t something that he’s going to connect with, I’m not even running it through to him. I trust his filter.”

The bonds Durant has formed in his two seasons with the Warriors, to which he arrived as a free agent after playing for the Oklahoma City Thunder, have helped his entrée into the media world. Selling “Swagger” to Apple became a slam dunk, since Apple’s VP of content services, Eddy Cue, is a rabid Warriors fan with whom Durant has grown closer. “Eddy’s an incredibly smart guy, and I’ve been lucky to get to know him personally before we started a professional relationship through the ‘Swagger’ series,” says the star.

During his keynote, Durant also teased another project in development “at a major network” that is an “updated version of HBO series “Real Sports with Bryant Gumbel.” Kleiman described the motivation for the series as a way to show the intersection of sports business and tech in layman’s terms for the sports fan.

As he spends his off-season in Los Angeles, Durant also praised LeBron James’ recent power play to join the Lakers. “I’m excited he took advantage of this opportunity to be in L.A. and play for the Lakers. It’s great that he decided to take his career to the next step,” he said. “To be here in L.A. is only good for him and for us basketball players to see that.”

Durant joked that he could pop up if the film had a sequel, “because I love Kyrie so much.” But he was quick to point out: “Who knows, man? I’m pretty much open for anything as long as something naturally feels right to me.”