Harvey Weinstein to Be Arrested on Friday in New York 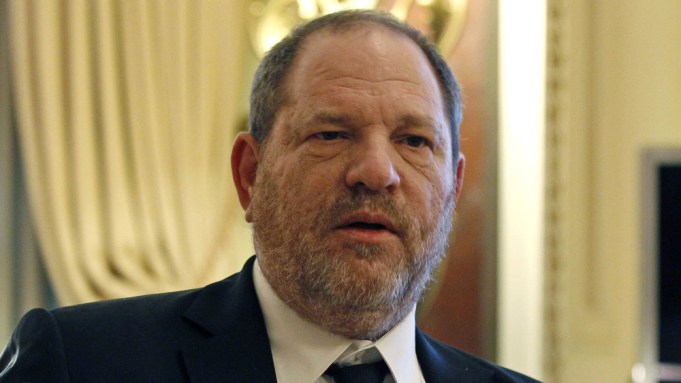 Harvey Weinstein is expected to surrender to authorities on Friday in connection with a sexual assault case.

The Manhattan District Attorney’s office is expected to charge Weinstein with at least one case. The New York Times and the New York Daily News reported the case would involve allegations that he forced Lucia Evans to perform oral sex during an audition in 2004.

Evans first told her story to the New Yorker in October, saying she went to the Miramax offices in Tribeca for a daytime meeting. She said she was ushered into a room where Weinstein was alone. During the meeting, Weinstein said she would be great for “Project Runway,” if she lost weight, and mentioned a couple of scripts. He then took out his penis and forced her to perform oral sex, she said.

“I said, over and over, ‘I don’t want to do this, stop, don’t,'” she told the magazine. Weinstein just kept on, and later acted as if nothing had happened, she said.

Evans later told her story to the New York Police Department. Forcible oral sex is considered a Class B felony in New York State, with a maximum sentence of 25 years in prison. The crime has no statute of limitations.

NYPD investigators have also talked with Paz de la Huerta, who alleges that Weinstein raped her twice in 2010.

“I was so terrified of him,” she told Vanity Fair. “I did say no, and when he was on top of me I said, ‘I don’t want to do this.’ He kept humping me and it was disgusting. He’s like a pig.”

Manhattan D.A. Cyrus Vance has been criticized for not filing charges more swiftly. The state attorney general’s office has also launched a query into the D.A.’s handling of a 2015 allegation that Weinstein groped Italian model Ambra Battilana. The D.A.’s office declined to charge Weinstein at the time, citing alleged flaws in the investigation.

More recently, NYPD investigators have said they are ready to arrest Weinstein, and have expressed public frustration with the prosecutor’s office. The Los Angeles County District Attorney’s office is also considering five cases against the producer, and he is under investigation by Scotland Yard in London.

More than 80 women have accused Weinstein of sexual misconduct. Some told of being trapped in hotel rooms, of being coerced into massages, or of being pinned down while the producer masturbated. One of his assistants, Sandeep Rehal, alleged in a lawsuit that she had to buy lingerie and erectile dysfunction drugs to prepare for his sexual encounters, and that she had to clean up afterwards.

“Harvey Weinstein should have been arrested and prosecuted a long time ago for his prolific criminal sexual acts,” she said. “Had he been held accountable years ago, there would be fewer victims of his sex crimes. His #TimesUp because so many fierce women have said #MeToo. We anxiously await the video of his surrender and will relish, and perhaps even frame, his mug shot.”

Weinstein has denied all allegations of non-consensual sex. Recently, he has sought to obtain his work emails from the Weinstein Co., which is now in the process of a bankruptcy sale. Weinstein’s attorneys have contended that his emails with the alleged victims would help disprove some of the criminal and civil allegations against him.

“Mr. Weinstein is currently in treatment for personal issues in the hope of becoming a better person and one day soon hopefully restoring his life and again continuing the pursuit of the extraordinary charity that he has always engaged in,” Brafman wrote in a court declaration earlier this month. “Mr. Weinstein vigorously denies ever engaging in criminal sexual misconduct and if given the opportunity to fully defend himself, he believes that all of these allegations will be shown to be without merit.”