Can Harvey Weinstein, the Poster Boy of #MeToo, Get a Fair Day in Court? 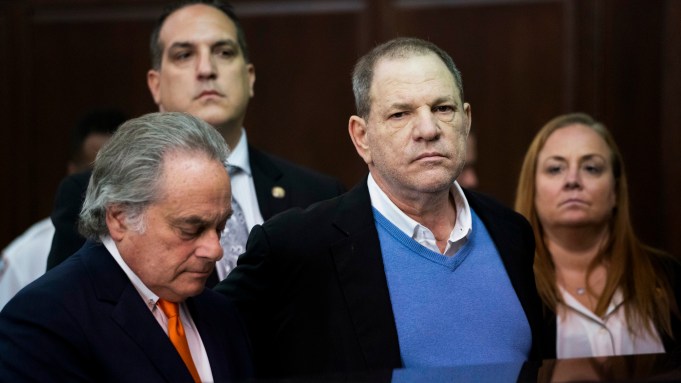 The Harvey Weinstein rape case will not be just another celebrity trial, but rather a focal point for a worldwide reckoning on sexual violence and workplace gender discrimination.

Weinstein’s attorneys, led by star litigator Benjamin Brafman, will have their work cut out in finding jurors who can set that context aside and evaluate the case with fresh eyes.

“I think this is almost an impossible case to win for Brafman,” said Bennett Gershman, a professor of law at Pace University in New York, who predicts that the case will not even get to a trial. “Weinstein is the poster boy for sexual predatory conduct. He’s the most reviled sexual predator in memory. There are so many pressures on Weinstein to avoid a trial and take a plea.”

It is, of course, early to say how the case will go. Weinstein faces three counts, including first degree rape, third degree rape, and forcible oral sex, with a maximum sentence of 25 years in prison. Prosecutors have disclosed only the slimmest details of the allegations, and one of the accusers remains anonymous. It is not clear how much corroboration there will be, or how strong the witnesses’ accounts will be on the stand.

Brafman is known for aggressive cross-examinations, and has won high-profile cases before. He represented Dominique Strauss-Kahn, the former head of the International Monetary Fund who was accused of sexually assaulting a hotel maid in 2011. Manhattan District Attorney Cyrus Vance — who is also the prosecutor in the Weinstein case — brought seven charges against Strauss-Kahn, including forcible oral sex and false imprisonment. Brafman hired Guidepost Solutions, a private investigations firm, to dig up information on the accuser, according to the New York Times. The case fell apart when Vance’s office lost confidence in the accuser’s credibility and dismissed the charges.

In the Weinstein case, Brafman has already said that he will file a motion to dismiss, and has said that the case is legally and factually deficient. The defense is also likely to argue that Vance was under political pressure to prosecute Weinstein.

“That’s more an argument for the court of public opinion,” said Laurie Levenson, a professor at Loyola Law School.

In other high-profile prosecutions, a defense attorney might be expected to seek a change of venue, arguing that pre-trial publicity had tainted the jury pool. But it will be hard to find anyone, anywhere, who hasn’t heard of this case.

“There’s no venue to hide in,” said Daniel Hochheiser, a criminal defense attorney in New York. “Hopefully you can come up with 12 people who say, ‘I’ve heard about it, but I’m not going to let that prejudice my analysis in the courtroom.'”

During jury selection, a key question will be whether prospective jurors have been victims of sexual assault.

“Mr. Brafman will prepare to try to weed out any women — or men — who have prior sexual harassment or assault experiences,” Hochheiser said.

One of the most important questions is whether prosecutors will seek to introduce “prior bad acts” — testimony of additional women who also allege that Weinstein assaulted them, but whose claims are not the subject of the charges. At the first Bill Cosby trial, in 2017, prosecutors were allowed to call just a single such witness. The trial ended in a hung jury. The second time around, the judge allowed five women to testify about Cosby’s pattern of behavior, leading to a conviction.

If the Weinstein prosecutors want to introduce such testimony, they will have to show the judge that the testimony demonstrates a common modus operandi — and does not merely serve to impugn Weinstein’s character.

“I think they will seek to do so,” Levenson said. “They’re going to have to have a pattern of conduct.”

Gershman, a former Manhattan prosecutor, said he expected Brafman to prolong the case as much as possible, and to fight on every front. But ultimately, he thinks Weinstein will have to face reality.

“The evidence is going to be piling up and piling up,” Gershman said. “I think not even the best lawyer would be able to mount a really intelligent, meaningful defense. I don’t see it happening here.”