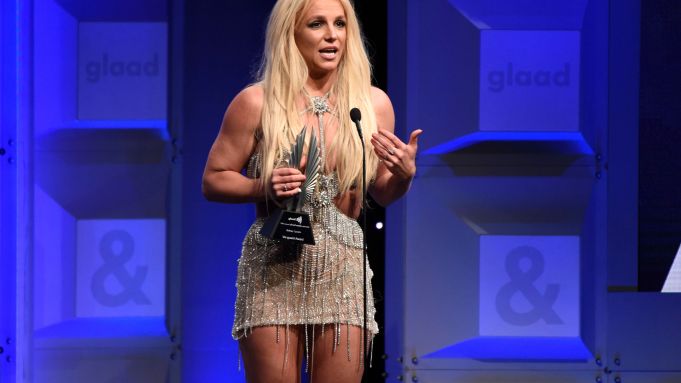 Britney Spears, Jim Parsons, and “This Is Us” were among honorees and winners at the 29th Annual GLAAD Media Awards on Friday night, held at the Beverly Hilton.

Spears made a rare red-carpet appearance on Thursday night and later electrified the room full of attendees during her brief acceptance speech for the vanguard award. An icon to the LGBTQ community, Spears’ appearance was among the most-anticipated moment of the night. Ricky Martin presented the award.

In her speech, Spears called for love and acceptance, and said it was a “blessing” to be able to “present yourself as an individual and express yourself through art.”

After she exited the stage, host Wanda Sykes joked that Britney had “broken the show” because the teleprompter stopped working. “Everyone has left their posts!” Sykes joked before carrying on with her hosting duties.

Also honored was Parsons, the “Big Bang Theory” star who has been out since 2012. He accepted the Stephen F. Kolzak Award, presented by “Glee” and “American Horror Story” creator Ryan Murphy. In his introduction of Parsons, Murphy called him “America’s f—ing sweetheart.”

Olympians Gus Kenworthy and Adam Rippon almost stole the show when they shared an unexpected kiss on stage, channeling Madonna and Spears’ on-stage smooch at the 2003 MTV Video Music Awards. The kiss was in jest, as Rippon complimented Kenworthy on coming out of his shell.

The star-studded awards ceremony recognizes and honors media for fair, accurate, and inclusive representation. Lena Waithe accepted the award for the “Thanksgiving” episode she wrote for Netflix’s “Master of None.” The episode guest starred Angela Bassett as a mother struggling to accept her daughter’s sexuality. GLAAD awarded it the outstanding individual episode prize.

Other winners included the Chilean film “A Fantastic Woman,” a feature about a transgender singer who faces discrimination and scorn after the sudden death of her boyfriend. Attendees included first-time GLAAD presenter, Halle Berry, who gave Waithe her award. Chloe Grace Moretz, Wilson Cruz, and Anthony Rapp were also on hand.

The awards show will be broadcast April 18 at 8 p.m. on Logo.

The full list of winners and honorees are below: