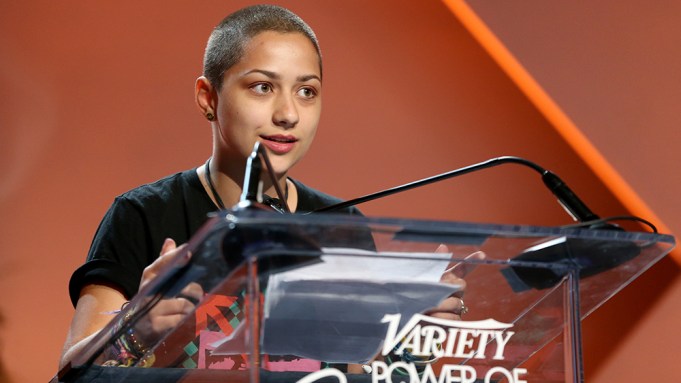 Emma Gonzalez was brought to tears during her speech at Variety’s Power of Women event, presented by Lifetime.

Reflecting upon the myriad of school shootings that have taken place over the past several years, Gonzalez couldn’t hide her raw emotions as she shared her own experiences with the effects of gun violence, before calling upon audience members to use their public platforms to take a stand for gun regulation.

Eight months after surviving the school shooting, Gonzalez said she can still feel the pain she experienced that day as if it’s happening right now.

“Nothing made sense in those days except for the fact that there was nothing to stop this from happening to anyone in a country with practically no gun safety laws,” she said.

Soon after, Gonzalez became a representative for the March for Our Lives organization, fighting for gun control legislation across America — a battle that Gonzalez said left her and her friends feeling “as though we are holding the country on our still-developing shoulders.”

Gonzalez also highlighted the presence of gun violence outside of the school environment, pointing to the numerous shootings at nightclubs, concerts, airports, and more. “Gun violence isn’t picky,” Gonzalez said.

Gonzalez went on to express gratitude that the voices of young people are finally being heard. “Before our voices were scoffed at and talked over. Now I’m an 18-year-old girl who’s here today,” Gonzalez said to claps from the audience. However, she also recognized that the people in the audience had the power to carry their voices further.

Gonzalez listed off the numerous victims of gun violence she met during her 64-day tour across America, including the victims of the Las Vegas and Charlottesville shootings, whose stories brought her to tears as she spoke.

Gonzalez then discussed some of the misconceptions surrounding March for Our Lives, making it clear that the organization is not trying to take away guns, before calling on audience members to use their own platforms to encourage more people to vote.

“Everybody in this room is in a unique position, because you are here, you have proven to hold power,” Gonzalez said. “To each of you powerful women I say this, you know that you are forces to be reckoned with, you can and have inspired peace and understanding and, most importantly, right now you can inspire your audience to vote. Now more than ever women need to continue to rise up.”