Bill Cosby Sentenced to Three to 10 Years in Prison 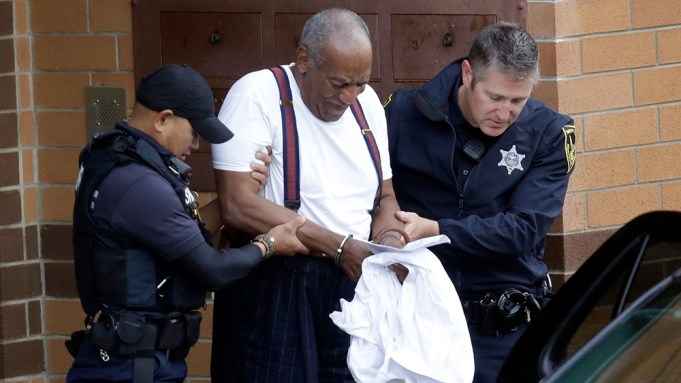 NORRISTOWN, Pa. — Bill Cosby was sentenced on Tuesday afternoon to three to 10 years in state prison for sexually assaulting a woman at his Philadelphia home back in 2004 — the final step in his downward spiral from America’s Dad to convicted felon.

Montgomery County Judge Steven T. O’Neill denied Cosby’s request for bail pending his appeal. Cosby took off his suit jacket, watch, and tie in the courtroom as two deputy sheriffs handcuffed him and transported him to county jail.

He will then will be transferred to a state facility, where he will be evaluated, and sent to a state prison — probably one in a rural part of Pennsylvania for old and infirm inmates.

Cosby showed no visible reaction to the sentence, which was close to the maximum that could be imposed. He remained seated in the courtroom, chatting quietly with his lawyers and two friends during a recess.

Under Pennsylvania law, Cosby will have to serve the full minimum of three years before he can be eligible for parole. The maximum possible sentence was five to 10 years behind bars.

“This is a serious crime,” said O’Neill, who rejected the defense request for house arrest, partial confinement, and even a chance to serve the sentence in the county jail as opposed to state prison.

O’Neill said he gave substantial weight to the impact of the sexual assault on victim Andrea Constand, who was seated in the courtroom when the sentence was announced. “I put a high degree of weight on the impact of the crime on the victim and her family,” said O’Neill.

Cosby’s publicist, Andrew Wyatt, denounced the outcome in a statement outside court.

“This has been the most racist and sexist trial in the history of the United States,” he said, laying the blame at the feet of “white women who make money off of accusing black men of being sexual predators.”

“They persecuted Jesus and look what happened,” Wyatt added. “Mr. Cosby is fine. He’s holding up well. Anyone who wants to say anything negative, you’re a joke as well.”

Cosby’s wife Camille, through a spokeswoman, issued a statement blasting the prosecutors for using “falsified evidence.”

At a news conference, District Attorney Kevin Steele said Cosby is no Cliff Huxtable (his “Cosby Show” character), but rather someone who used his acting skills to prey on women. Justice, he said, has finally been served with the prison term. “It’s been a long time coming,” said Steele.

Steele credited Constand for reporting the attack to police and testifying.

“This assault changed her life,” said Steele as Constand stood nearby. “She’s been a rock. She’s done the right thing.”

Steele said it was no “cause for celebration” for Cosby to be led off in handcuffs. “We take very seriously the taking of somebody’s liberty,” but, he went on, “Our job is to separate the predators from the good people of our community, and that happened today.”

Among the women who accused Cosby of assault, the sentence was accepted with a mix of emotions, though mostly relief. There was a former supermodel, an ex-Playboy bunny, and the former wife of Alan Ladd. Several of the women who testified at trial, to show a pattern of similar conduct by Cosby, were also there.

“We’re just thrilled to death,” said Victoria Valentino, a former Playboy bunny who attended both trials. “It’s just a matter of having that final curtain call so we can have some real serious feelings of closure.”

Former entertainment executive Cindra Ladd, now 70, said she has been dealing with the emotions of having been sexually assaulted since approximately 1969. She added that she was grateful to O’Neill for “making sure justice was served.”

“I really wanted to be here, especially with some of my other survivor sisters,” Ladd, who used to be married to producer Alan Ladd, said. “It was important for me to see him.”

Earlier in the day, O’Neill declared the former TV star a “sexually violent predator.” The designation means that Cosby, who is legally blind, will be subject to a lifetime of reporting requirements, meaning he will have to advise law enforcement authorities of where he is residing.

Steele asked O’Neill to impose the maximum sentence of five to 10 years in state prison, and to reject defense arguments that Cosby should be allowed to serve any sentence under house arrest.

“This should be a state prison sentence,” said Steele.

Green rejected the prosecution’s contention that Cosby should be considered dangerous, saying he couldn’t recall any instance in which an 81-year-old, blind defendant had been sent to state prison.

Cosby was found guilty in April of molesting Constand, who had been operations manager of the women’s basketball team at Temple University, where Cosby had been a major supporter and donor.

It was the first sentencing of a celebrity in the passionate atmosphere of the #MeToo movement, and the case provided a backdrop not just for Constand’s allegation, but for some of the dozens of other women who accused Cosby of assaulting them, and faithfully attended the court proceedings.

But only Constand’s allegation was the focus of a criminal trial, and she was in court for the sentencing, telling O’Neill she was asking only for “justice as the court sees fit.”

Constand, who is now a massage therapist in Canada, testified during the trial in April and in an earlier trial last year that ended with a hung jury, that she had become friends with Cosby, and viewed him as a mentor.

She testified that she took three blue pills Cosby offered her during a visit to his home outside Philadelphia in early 2004 because she trusted Cosby and believed they were some kind of an herbal relaxant. But then, she testified, she soon became incapacitated and felt his fingers inside of her, but “couldn’t fight him off.”