Beyonce and Jay-Z’s ‘Everything Is Love’ Now Available on Apple Music, Spotify, Amazon 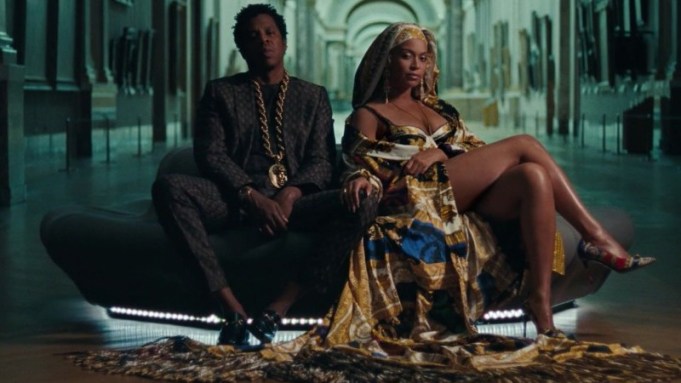 At some point in the wee hours of Monday morning, Tidal’s exclusive on Beyonce and Jay-Z’s new tag-team album “Everything Is Love” became available on Apple Music (and iTunes), Spotify Premium, Amazon and Pandora — and a spokesperson for Spotify confirmed to Variety that the album will be available on the service’s free tier in two weeks.

However, bonus track “Salud” — which was released at the same time as the album and features similar artwork but is not in its sequence — remains a Tidal exclusive.

This breaks the tradition set by Beyonce’s 2016 “Lemonade,” which remains a Tidal streaming exclusive more than two years after its release, although it is available for download on iTunes.  “Beyonce’s album ‘Lemonade’ is not currently available on Spotify,” the notice reads. “We are working on it and hope to have it soon.”

Tidal is primarily owned by Jay-Z in partnership with several other artists, including Beyonce.

The album arrived on Saturday afternoon after hints began trickling out with social media posts containing images from the “Everything Is Love” visual campaign. One image posted by Beyonce on Instagram received nearly 200,000 likes in less than 20 minutes as many noted that, once again, Queen Bey had broken the internet.