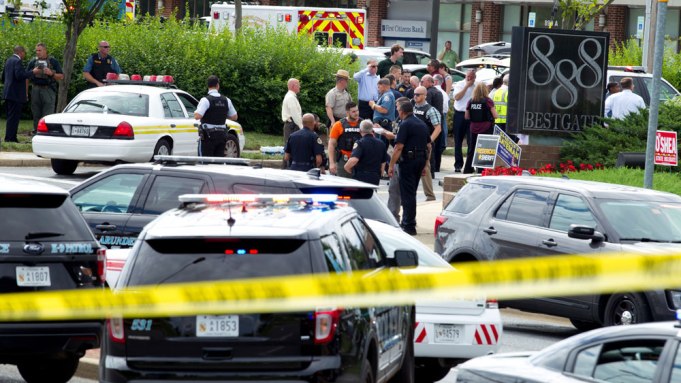 At least five people were killed and two others were injured following a shooting at the Capital Gazette in Annapolis, Md., on Thursday afternoon.

Hiaasen was the brother of well-known novelist Carl Hiaasen, who confirmed the news in a Facebook post. “Rob was an editor and columnist at the paper, and one of the most gentle and funny people I’ve ever known. He spent his whole gifted career as a journalist, and he believed profoundly in the craft and mission of serving the public’s right to know the news,” the post reads.

One suspect is currently in custody and police believe no other shooters are in the building. Officers said they had secured the premises after recovering what appeared to be an “improvised explosive device.”

Krampf said the man entered the building, looking for his victims.

Krampf said the suspect targeted the newspaper. Although he couldn’t confirm the gunman’s relationship to the organization, he said there could possibly be a connection through social media.

According to NBC News, the suspect has been identified as 38-year-old Maryland resident Jarrod Ramos.

Phil Davis, a Gazette crime reporter who was at the scene of the shooting, said a single gunman opened fire using a shotgun on several people. About 170 people were inside the building on 888 Bestgate Road at the time of the shooting.

“A single shooter shot multiple people at my office, some of whom are dead,” he tweeted.

A single shooter shot multiple people at my office, some of whom are dead.

Davis took to Twitter to report developments as he was waiting to be interviewed by police.

He said a gunman shot through the glass door to the Gazette office and opened fire on several employees.

“Can’t say much more and don’t want to declare anyone dead, but it’s bad,” he wrote.

Gunman shot through the glass door to the office and opened fire on multiple employees. Can't say much more and don't want to declare anyone dead, but it's bad.

Police — who said they reported to the scene of the crime within a minute and a half — evacuated the premises, ushering people out of the building with their hands up, and continued to search the building.

President Donald Trump addressed the shooting on social media. “My thoughts and prayers are with the victims and their families. Thank you to all of the First Responders who are currently on the scene,” Trump said.

Maryland Gov. Larry Hogan tweeted that he was “absolutely devastated to learn of this tragedy in Annapolis.” “Please, heed all warnings and stay away from the area. Praying for those at the scene and for our community,” he added.

Sen. Chris Van Hollen of Maryland wrote on Twitter, “My heart is with the families, friends, and loved ones of the victims as we learn more about this terrible situation. We must unite to end the violence.”

The newspaper is part of the Baltimore Sun Media Group. The New York Police Department has dispatched officers to various media outlets in New York City in response to the shooting.

“SPJ is deeply saddened by the reports from Annapolis, Maryland, that a shooter entered the Annapolis Capital Gazette building and shot several people,” Society of Professional Journalists national president Rebecca Baker said in a statement. “Our hearts go out to the victims and their family, friends and colleagues. We are ready to help in any way we can.”