ABC Ignored Roseanne Barr’s Racism at Its Own Peril (Column) 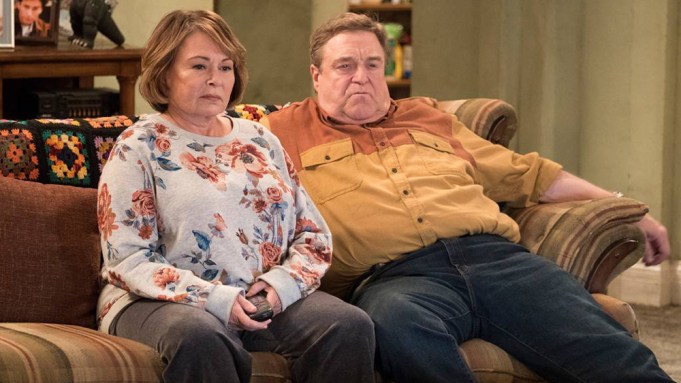 When Roseanne Barr tweeted Tuesday morning that former Obama administration adviser Valerie Jarrett is the product of “the Muslim Brotherhood + Planet of the Apes,” she finally found the edge of offensive behavior that ABC decided it couldn’t tolerate, even for a show drawing 18 million-plus viewers a week.

“Roseanne’s Twitter statement is abhorrent, repugnant and inconsistent with our values,” said ABC Entertainment president Channing Dungey, “and we have decided to cancel her show.”

It’s a strong, unequivocal statement that makes it clear that ABC doesn’t want to reward outright racism. It was a commendable decision that will cost the network advertising dollars and visibility as its most-watched comedy series in years was destroyed in a matter of minutes. But it is still a shame that it took so long for the network to find that line when Barr had been spewing hate for years before ABC gave the “Roseanne” revival a green light.

Barr’s history of spreading conspiracy theories and sneering at anyone who dared question her is long and omnipresent. Before and after ABC picked up the revival, she tweeted aggressively in a way that made it clear she’s not merely an angry conservative railing at what she sees as wrong with American politics and culture. She’s tweeted wholly unfounded theories involving a string of recent phantom controversies fueled by social media but proven to be utterly false. Pizzagate, Seth Rich, Spygate, QANON, President Trump breaking up sex trafficking rings worldwide, and on, and on, and on. Just Tuesday morning, she claimed Chelsea Clinton is married to George Soros’ nephew, and when corrected, claimed Soros was a Nazi sympathizer who sent Jewish people to die. She has called Islam a “pedo culture,” and in a racist statement that feels reminiscent of Tuesday’s disaster, said Susan Rice, former U.S. Ambassador to the United Nations and an African-American, has “swinging ape balls.”

Barr’s embrace of this kind of ugly hatred isn’t new. ABC’s rejection of it, however, is.

For months, ABC has insisted that Barr’s behavior offscreen shouldn’t affect viewers’ opinions of “Roseanne” onscreen. When it was revealed that Roseanne Conner would be a Trump supporter in 2018, the cast and creative team alike emphasized that Barr was Barr, and “Roseanne” was “Roseanne.” The initial publicity blast was all about the value of bringing “different viewpoints” together, hashing things out, and speaking frankly about “hot button issues.”

As star and co-producer Sara Gilbert insisted at January’s Television Critics Association press tour, they saw “Roseanne” as “a great opportunity to have a family that can be divided by politics, but still is filled with love.” And when Barr eventually ended that session by stating that “a large part of why I could not vote for Hillary Clinton is because Haiti,” ABC PR chief Jori Arancio quickly cut in to insist they were “out of time.”

That the show’s star had become a rabid conspiracy theorist who used her platform to push baseless rumors was brushed off like a mere annoyance, like Barr was an embarrassing grandma the network tolerated with an affectionate eye roll because hey, she’s family. That she had previously made racist statements like the one she made Tuesday was straight-up ignored.

The inconvenient truth of the matter is that while the Jarrett insult was particularly awful, it wasn’t a particularly unusual statement for Barr to make. It was, despite her apology that she “should have known better,” exactly in line with the persona Barr herself has cultivated — one ABC had to be aware of when it decided to get back in business with her.

In that respect, one of the most frustrating things about how ABC and Barr’s conservative supporters – including President Trump – talked about her when the show became a success is that they kept conflating Barr herself with the character she was playing. When ABC’s cancellation decision is inevitably hurled by extremist Trump supporters as another sign that the liberal media is silencing conservative voices, it will be a fallacy. Barr isn’t the working class hero she portrayed on TV, but a rich celebrity who tweets bile to millions when she gets bored. Pointing out as much isn’t denigrating conservatives or the working class, but the people like Barr who have seized upon spreading discontent to pump poison into the country’s veins.

ABC taking a clear stand against Barr’s racism and the fact that she blasted it after drafting off the success of the show ­is the right thing to do. But if the network was truly worried about Barr sullying its “values,” it wouldn’t have given her such an elevated platform in the first place.