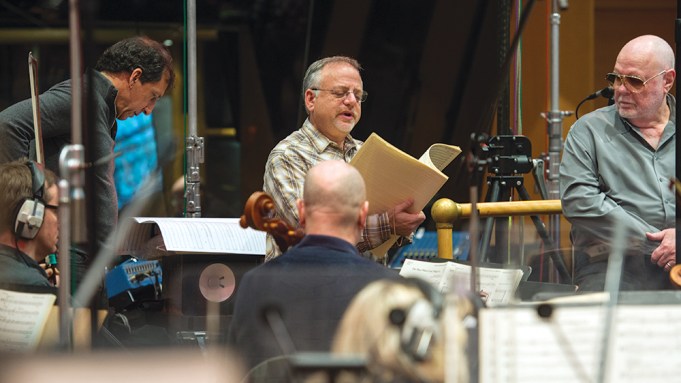 Back in 2014, composer-songwriter Marc Shaiman came across a vinyl copy of the “Mary Poppins” soundtrack album and created a Facebook video of himself dropping the needle onto the record, then sitting back in ecstasy. He called his video “Heaven.”

A few months later, he learned that the Walt Disney Studios was embarking on “Mary Poppins Returns,” a sequel to that 1964 classic, and he begged director Rob Marshall for the job of writing the songs (along with his co-lyricist Scott Wittman).

Repeated listens of the “Poppins” soundtrack — with its iconic, Oscar-winning tunes by brothers Richard M. Sherman and Robert B. Sherman — formed the basis of “my entire musical life,” Shaiman says. “I learned everything about songwriting, arranging, orchestrating and writing for film from the ‘Mary Poppins’ soundtrack. For the first 18 years of my life, that was my school.”

Shaiman and Wittman got the job, and their nine new songs (mostly sung by stars Emily Blunt and Lin-Manuel Miranda) are in the classic Disney tradition. “It’s a completely original score,” says Marshall, “but it has the feeling of the Sherman Brothers. That was the plan and the goal from the very beginning.”

“Our love for the original movie overrode our fears,” says Shaiman (a five-time Oscar nominee for such films as “Sleepless in Seattle” and “The American President” and, with Wittman, a Tony winner for the musical “Hairspray”). “We re-embraced the thing we loved as children. There’s no need for irony or snark. This is our love letter to the original.”

We re-embraced the thing we loved as children. There’s no need for irony or snark. This is our love letter to the original.”
Composer Marc Shaiman

Working closely with Marshall and co-writers David Magee and John DeLuca, they drew inspiration from the P.L. Travers books. So although the challenge was “terrifying,” Wittman concedes, returning to the original source of Poppins adventures “was liberating, and freeing, in a way.” The duo penned tunes with such evocative titles as “Can You Imagine That,” “Underneath the Lovely London Sky” and “The Place Where the Lost Things Go.”

“A song needs to be earned, especially a ballad,” adds Marshall, “because it has to feel like it’s coming seamlessly out of the story.” So he and his collaborators designed the film as they would a Broadway musical, with songs advancing the story, advancing character to offer as much depth as possible. “In juxtaposition with these fantasies and adventures, we have a very real story with real people that you care about,” Marshall notes. “That was very important to me.”

Most of 2016 was spent working out the story and writing the songs (including several that didn’t make it into the final version). Later that year, Shaiman and Wittman joined Marshall and key members of the cast for more than two months of rehearsals at London’s Shepperton Studios prior to recording the songs. Filming began in late January 2017.

Of special concern to Marshall were the moments when the actors broke into song. The classic way of making movie musicals was, in years past, to pre-record the tunes and then have the actors lip-sync to them during shooting. It wasn’t always convincing.

“When you’re experiencing the film, it should all feel live,” Marshall says. “You should never know where actors are singing live and where they’re not.” So the final product is a combination of pre-recorded vocals and ones that were done live on the set.

“Rob likes to blend the two,” explains Blunt. “You pre-record your vocals, and then Rob — in a very transporting way for all of us — blares it from speakers around the set so you aren’t even lip-syncing, you’re singing along with yourself. Then there would be that awful moment where Rob would say, ‘OK, we’re going to do one live.’ You’d be handed a little earbud, and you’d be the only person on set who could hear the music, so to everybody else you’re singing a cappella. It’s never anyone’s favorite moment. But then it gives you that seamless blend of live and pre-record. Rob always wants it to be very fluid.”

What surprised Shaiman was Marshall’s suggestion that, in addition to pre-recording the orchestra and vocals, he write and record approximately 20 minutes of additional music — variously lighthearted, exciting and emotional — prior to shooting. “Rob is a big believer in putting the actors in the right mood with music,” Shaiman says. Not only was it played on the set, but all of it wound up in the final version of the film.

“The little boy in me had this fantasy, this dream, to somehow become part of the ‘Mary Poppins’ story,” Shaiman says. “The weeks of scoring this movie were the greatest weeks of my life.”