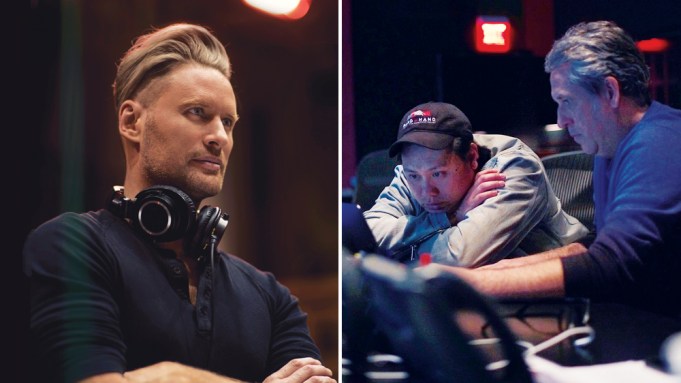 Adapting a best-selling novel for the screen — in this case author Kevin Kwan’s “Crazy Rich Asians” — always requires taking a written narrative and adjusting style and pace to create the language of a motion picture. Director Jon M. Chu’s film successfully makes that transition, thanks in part to the work of editor Myron Kerstein and composer Brian Tyler.

As he edited the picture, Kerstein says he deployed the tricks of his craft to incorporate and meld nuances of feeling, humor and pageantry. “You have to respect the source material as much as possible,” he says, “but you have to find your own film in the middle of it.”

The final third of the movie, which centers on a climactic wedding and reception, became Kerstein’s favorite part to cut. It was a chance to “tell a story that’s not filled with words but with emotion,” he says.  “It’s so beautiful and absurd at the same time.”

In addition to finding the right pacing, Chu relied on the storytelling power of music to fill in some of the words of Kwan’s detailed book. “Music is just as effective as paragraphs,” he says, “so we really used it as a way to fill in the world.”

The director curated a music playlist for Kerstein and Tyler to reference — first running it by his Chinese immigrant parents. They remembered swing dancing to some of the songs back in China, so it “became this cornerstone to the style of the movie,” says Chu. “It was elegant, it was cool, it was like a throwback, but it wasn’t ancient China with a gong.”

Tyler built on that musical narrative to sustain the film’s themes and wrote a score that “was completely old school, even from the perspective of how it was recorded … in the style of 1950s big-band jazz.” He conducted the scoring sessions and used period microphones and a full jazz band and orchestra to capture the rich sounds of the era.

Tyler played many of the instrument solos, including drums and vibraphone. He credits Kerstein’s editing for making “it feel like the music existed [already], because he was careful about every little moment and hitting every little nod and turn.”

Edited into the film seamlessly alongside Tyler’s original score are popular songs translated into Chinese from English. Also included on the soundtrack was Coldplay’s “Yellow,” which was of particular importance to Chu, who explains, “Yellow has been used to describe our skin for so many years, and it’s so negative … and to me it’s us taking the term back.”

Tyler’s score evolved up until the last minute. “To do something that was in this tone,” he says, “was a complete treat.”

Kerstein notes that the film changes tone as it progresses. “In the beginning, [the movie is] almost like a traditional romantic comedy,” he says. “And slowly, subversively, it starts to become more of a serious drama.”