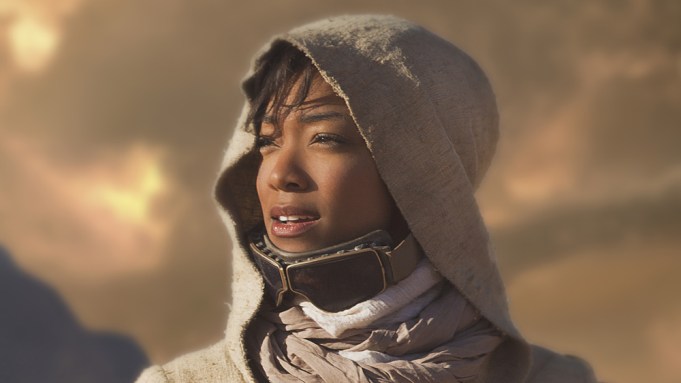 “Star Trek: Discovery” opened its panel at San Diego Comic-Con on Saturday with a brand new look at the upcoming CBS All Access series.

In the clip, Lt. Commander Michael Burnham (Sonequa Martin-Green) opens by saying, “All life is born from chaos. The world doesn’t always adhere to logic. Sometimes down is up. And sometimes when you’re lost, you’re found.”

It then shifts to the Klingons, whom viewers are told have been in disarray for years but are now reemerging for a war against Starfleet. A Klingon leader says, “We have been waiting for someone worthy of our attention.” The clip also teases that the series will explore the invention of warp drive, and gives fans their first glimpse of Rainn Wilson as interstellar huckster Harry Mudd.

Martin-Green also revealed that her character is the surrogate daughter of Vulcan ambassador Sarek who took her in after the murder of her parents, which essentially makes her the sister of Spock.

Plot details for the show have been kept under wraps, but it is known that the series takes place in the years before Captain James T. Kirk was at the helm of the Enterprise. Martin-Green stars alongside Jason Isaacs, Doug Jones, Michelle Yeoh, and Anthony Rapp among others.

“Discovery” was originally set to launch CBS All Access in January 2017, but the hotly anticipated series has been repeatedly delayed. As Variety previously reported, sources say difficulties casting and behind-the-scenes flux, including Bryan Fuller stepping down as showrunner, are cause for the show’s delay. CBS Corp. boss Leslie Moonves previously said at an investor conference that he was confident in the quality of the series, and the delay is due to requiring a lot of post production. “It’s important to get it right, and ‘Star Trek’ is the family jewels,” Moonves said.

The series will now launch Sunday, Sept. 24 at 8:30 p.m./7:30c on CBS, though that time is approximate due to NFL Football and “60 Minutes” also airing that night. The series premiere will also be available on-demand on CBS All Access and the second episode of the series will be available on the service that same night immediately following the broadcast premiere.

After premiere night, all new episodes will be available on-demand weekly on Sundays exclusively for CBS All Access subscribers in the U.S. The 15-episode season will be released in two parts. The first eight episodes will run from Sept. 24 through Nov. 5. The season will then resume in January 2018.