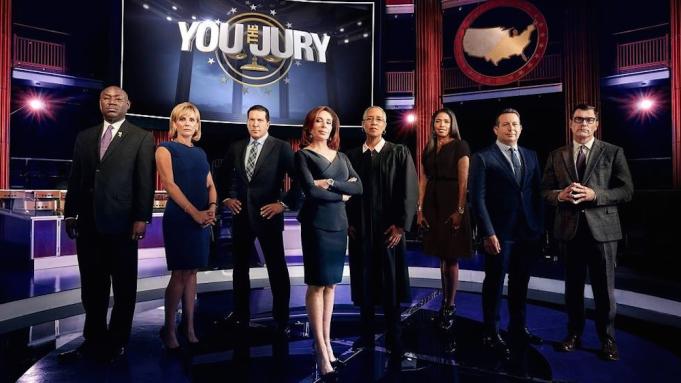 Fox is taking the live voting principle that rocketed “American Idol” to popularity and applying it to real civil court cases. The result is “You the Jury,” the broadcaster’s latest reality series hosted by Fox News’ Jeanine Pirro, and as you can see in the trailer above, it’s a bit like “American Idol” meets “Judge Judy,” complete with a live, gasping audience.

Each week, the show’s prosecution and defense — including attorneys Jose Baez, who defended Casey Anthony; Benjamin Crump, who has fought for justice for Trayvon Martin; and Joseph Tacopina, who has represented some of the biggest stars in the country; as well as Areva Martin, Mike Cavalluzzi and Charla Aldous –– will question and cross-examine the litigants and expert witnesses, as they present their arguments to America and former judge of the Superior Court of California LaDoris Cordell.

Here’s where it gets a little complicated: Viewers will have the opportunity to vote for approximately five minutes, via text and the FOX Now App, after the case has been presented. At the end of the East/Central time zone broadcast, “America’s Verdict” will be revealed. The vote on the verdict is 100% live and binding and it will reflect the decision made by the American public. However, when the West Coast votes, if the cumulative votes (East/Central and West Coast/Mountain Time Zone combined) lead to a different verdict, the original verdict will be overturned as the final outcome of the case.

“You the Jury” premieres Friday, April 7 on Fox.