Continue to Variety SKIP AD
You will be redirected back to your article in seconds
Apr 30, 2017 10:23am PT

Will Ferrell Revives His George W. Bush Impression for Samantha Bee’s ‘Not the WHCD’ 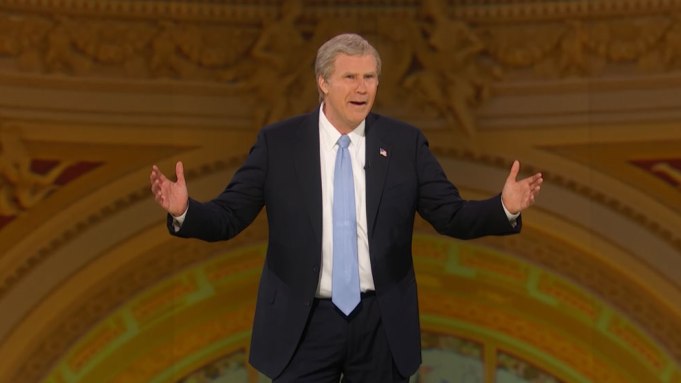 Samantha Bee teased a surprise guest from the very beginning of her “Not the White House Correspondents’ Dinner,” and Will Ferrell was eventually revealed to be the cameo in question. The comedian resurrected his iconic George W. Bush impression during one of the special’s final acts.

After sauntering onto stage with a cigarette in hand, Ferrell’s “Dubya” received a standing ovation at the very first words out of his mouth: “How do ya like me now, huh?”

The “You’re Welcome America: A Final Night With George W. Bush” star used the bit to simultaneously mock both the 43rd and 45th Presidents of the United States. Highlighting the Republican politicians’ similarly strained relationships with the media, Ferrell’s “Bush” addressed the reporters in the audience directly. “You guys would always sneak up on me with ‘gotcha’ questions, like, ‘Why are we going to war?’ Gotcha, and ‘Why did you not respond to Hurricane Katrina?’ Gotcha,” he joked in character. “I just wish someone had told me all you had to say was ‘fake news’ over and over again. That could be your answer to everything.”

Ferrell even showed off “Bush’s” painting skills with a half-finished portrait of President Trump. “As you can see, I exhausted my palette of yellows and oranges,” he lamented. “It’s clear that he has an unnatural color to him, it’s a strange hue, it’s not really orange or yellow. I have a new name for that color, they should just call it Mar-a-Lago.”