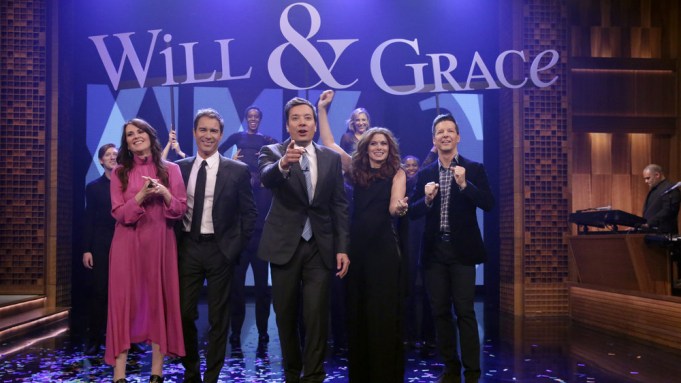 The cast of “Will & Grace” brought their NBC show’s iconic theme song to life Friday night on “The Tonight Show.”

Jimmy Fallon introduced the foursome, as each took the stage, one by one, to perform solos.

The song begins with Messing singing, “I’m Debra Messing as you probably know. You might remember me from the cast of the show. Grace is a character that I play — interior designer and Will’s roommate.”

McCormack then joins in from the audience, “I’m Eric McCormack and I play Will. The show is coming back and I’m playing him still. You can see it this fall on NBC, remember when we used to call it ‘must-see TV?'”

McCormack and Messing together belt out the chorus, “Get down! ‘Will & Grace’ is coming to town!”

“It’s more fun than you could ever know. Only show on NBC not set in Chicago,” Mullally later adds, before being joined by Hayes, who insists it “just might be the best show in the whole universe, but it’s still on NBC so we can’t f—ing curse.”

The revival premieres Thursday at 9 p.m. ET on NBC.