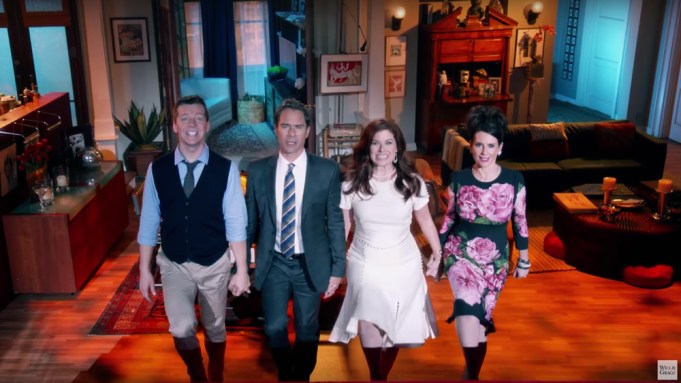 In anticipation of NBC’s “Will & Grace” revival this fall, Will, Grace, Jack and Karen have reunited in the first official trailer for the special event series.

The five-minute-long trailer begins as the titular characters exit the office of Bob Greenblatt, the president of NBC Entertainment.

“Again, Bob, so excited,” Will says. “I can’t believe we’re back, taking the old peacock for the another ride around the … “Thing,” Grace says, finishing his sentence. “Riding the old peacock? You know you got the job, right? You left all your lipstick on this a—,” she reprimands.

The limited 12-episode run brings back cast members Eric McCormack, Debra Messing, Sean Hayes, and Megan Mullally with original series creators Max Mutchnick and David Kohan, who will serve as showrunners and executive producers. James Burrows, who directed the entire eight-season run of the original series, is back as director and executive producer on the revival. Universal Television is producing.

“Will & Grace” aired on NBC from 1998 to 2006 with over 200 episodes. The series was one of the first broadcast shows to feature gay characters, revolving around a gay man, Will (McCormack), and his best friend, Grace (Messing), along with their friends, Jack (Hayes) and Karen (Mullally).

Last week, NBC released a teaser, which teased a possible musical number would be featured in the revival series — turns out, that teaser was teeing up Monday’s Upfront presentation at Radio City Music Hall, which welcomed the cast on stage for a surprise musical number. (Watch a clip below.)

As promised, I now have wifi and here's video of the #WillAndGrace cast's musical number at #Upfrpnts2017! pic.twitter.com/t7BTIFjfv0