Is ‘Will & Grace’ Revival a Musical Series? (Watch) 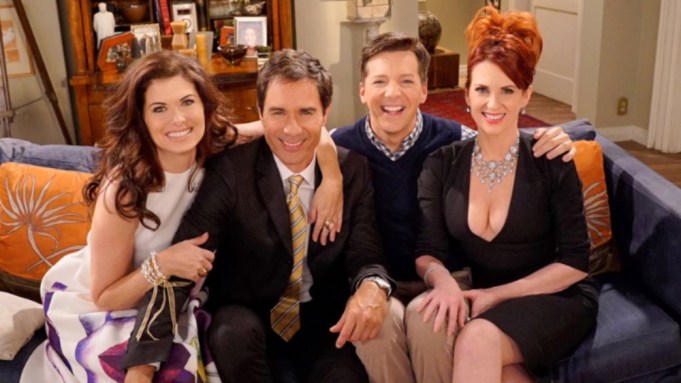 Update, May 15: The musical teaser appeared to be teasing an a surprise number at NBC’s Upfront presentation. On Monday, May 15, the cast of “Will & Grace” surprised the audience at Radio City Music Hall in New York City, performing a musical number. Still no word from NBC on whether the actual TV series will feature any musical moments. (Click here to watch a clip from Upfronts.)

“Will & Grace” is back — but will the revival be a musical?

NBC released the first footage from the upcoming revival series on Friday, and in the blink-and-you’ll-miss-it moment, the clapboard reads: “Will & Grace Musical.”

The behind-the-scenes clip shows original stars Eric McCormack, Debra Messing, Sean Hayes, and Megan Mullally gearing up to tape a scene. The four cast members are holding hands and smiling as someone on set yells, “We are still rolling.” Then another voice is heard saying, “105, take one,” meaning the footage is from the fifth episode of the series — which appears to be a musical episode.

NBC declined to comment on any aspects regarding the possible musical number.

The revival premieres with a 12-episode limited run this fall.

The sitcom aired on NBC from 1998 to 2006, spanning 206 episodes. The series revolved around a gay man, Will (McCormack), and his best friend, Grace (Messing), along with their friends, Jack (Hayes) and Karen (Mullally). The show, which was one of the first-ever broadcast shows to feature gay series regulars, won 16 Primetime Emmy Awards over its run.

Check back to Variety this Monday for the full official trailer for “Will & Grace.”