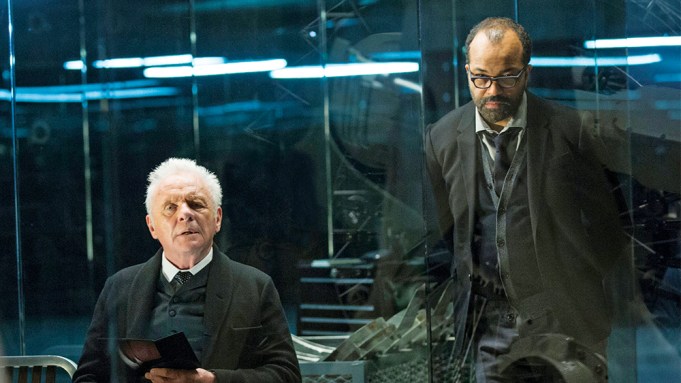 The cast and creators of “Westworld” brought a very early look at Season 2 of the series to San Diego Comic-Con on Saturday.

Among the brief collections of images fans were treated to, Bernard (Jeffrey Wright) stands beside a river next to a dead tiger. In another, Delores (Evan Rachel Wood) and a man who appears to be Teddy (James Marsden) ride through a field on horseback, gunning down a group that is running from them. Season 2 is scheduled to air in 2018 on HBO.

The cast was also asked at the “Westworld” Comic-Con panel on Saturday how they felt about having the various twists in the series revealed to them in stages rather than at the beginning of filming.

While Thandie Newton said she appreciated the fact that creators Jonathan Nolan and Lisa Joy kept things from them to avoid confusion, Wright joked, “I just went on Reddit.”  Wright went on to say that Joy revealed to him early on what his character arc would be for Season 1.

“When we came back for full production on episode two, Lisa pulled me aside and dropped the hammer onto my head,” he said. “I didn’t know the full extent of what it meant… I knew that it would be kind of an interesting foil to play.”

Nolan and Joy also spoke about the various media that influenced the show other than the original film, revealing that video games like “Grand Theft Auto” and “Red Dead Redemption” played a big part in developing the feel of the show.

“My wife is the only person in the world who obeys traffic signals in ‘Grand Theft Auto,’” Nolan joked.

Fans in Hall H were also treated to a Season 1 blooper reel, which included Wright and Anthony Hopkins fist bumping, Hopkins dancing his way across the set, and a horse relieving itself in the background while Evan Rachel Wood tries to look dramatic in the foreground.

The series recently was nominated for 22 Emmy Awards, making it and “SNL” the most-nominated shows of 2017. In addition, Jonathan Tucker and Neil Jackson have both been cast in Season 2.