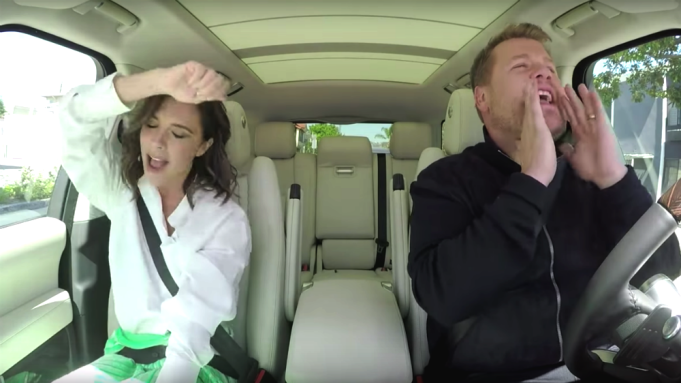 James Corden adds a little spice to his life when he falls in love with a plastic Victoria Beckham in a spoof of the 1987 romantic comedy “Mannequin” on Thursday night’s episode of “The Late Late Show.”

“He was a talk show host, and she was a mannequin who turned his world upside down,” a voice-over explains at the beginning of the sketch. “To everyone else, he’s a disaster. The world couldn’t understand their love.”

Corden becomes wildly offended when a perplexed co-worker criticizes his love interest, calling her a “dummy,” since Corden sees her quite differently: “Do not speak to her that way! She taught me how to laugh!” he responds as he stares lovingly into the mannequin’s eyes.

Eventually, Beckham comes to the conclusion that she wants to be in a world with others like her, and Corden promises to get her “home.” He runs out of the studio lot holding Beckham’s hand (though the rest of the world sees him running down the street holding a mannequin), and the two proceed to indulge in a session of Corden’s ritualistic sketch “Carpool Karaoke.” The Posh within is unleashed, as they belt out lyrics to the Spice Girls hit “Spice Up Your Life.”

Corden finally returns Beckham back to her rightful home as a mannequin in Target, which is where she will be launching her collection on Apr. 9.