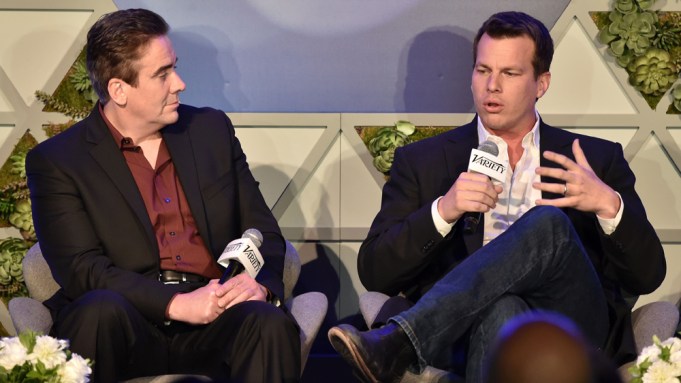 The creative minds behind some of the biggest dramas on television convened for Variety‘s A Night in the Writers’ Room to discuss how they came to their shows and how their networks have or have not pushed back when it comes to pushing boundaries.

For DuVernay, she didn’t so much chase after the source material for the show as much as OWN’s founder, Oprah Winfrey, insisted that she read it during a vacation at Winfrey’s home in Maui.

“While I was there, there was a book on the nightstand on the right hand side,” DuVernay said. “And there was a lot of books around because she’s really into books. Then the next night the book was on the right hand side and the left hand side. So I asked her, ‘Do you have something to do with this book?’ and she said, ‘Oh, yes.’ So she urged me to read the book. I read it on my flight home and called her and said, ‘Gosh, I thought it was really fascinating.’ My father is from the Deep South in Montgomery, Alabama, and it’s about a family where one of the main characters is in Los Angeles and the rest of her family is in Louisiana. So I felt like I could enter into it from her point of view.”

Nolan, who works on the the new HBO series with his wife Lisa Joy, said their involvement came from their time collaborating with JJ Abrams, who had been formulating a plan to reboot the “Westworld” film for years.

“I’d been working with JJ Abrams for a few years on ‘Person of Interest,’” Nolan said. “And doing broadcast, 23 episodes a year thing, we said, ‘This isn’t challenging enough. Let’s throw something else on top of this.’ JJ had actually sat down with Michael Crichton 23 years earlier to talk about a reboot for the movie version of [‘Westworld’]. JJ hadn’t quite figured out how to remake it as a film, so in his way he sat on it for 20 years and called us and said, ‘You can do something really special with this.’”

Of course for some, the process was not quite so arduous, as Kelley explained that “Big Little Lies” came to him practically ready to go by the time he signed on to write and executive produce the show.

“I would like to say it was a long ordeal. It was much easier. I didn’t have to go to Hawaii, I didn’t have to wait 20 years,” he joked. “There was a book, it was a great book. And Nicole Kidman and Reese Witherspoon brought it so I thought, ‘I don’t even have to cast it.’ And HBO, we pitched it to them first, and they bought it. It was literally from book to series within a year. It doesn’t always go that way. The ride is usually a lot more bumpy but this was a confluence of a lot of great circumstances, starting with a really terrific book.”

The panelists also discussed how their various networks have either encouraged or discouraged them from pushing boundaries with their shows, with most saying that their networks have been very supportive about pushing the envelope if it helps the overall story.

“USA and UCP really let us take a risk,” Bradstreet said. “It was something that really seemed sort of like a first over there. It was like, ‘OK this is absolutely bats–t insane. We’re letting you guys go see what comes of it.’ And the notes that come back are very supportive. They’re totally onboard. There’s like one thing we’re not allowed to do. It’s like somebody can hallucinate, we can do a sitcom episode, we can slice somebody’s throat, whatever, but if there’s vomit, that’s the line.”

As the lone broadcast representative on the panel, Orman said he was surprised by how willing NBC was to allow “Shades of Blue” to go where other network shows typically did not.

“My expectation was we weren’t going to be able to push these anti-heroes as far as we needed to,” he said. “This show is basically a morality play on steroids. And we’re limited by language and other things. I call it a hybrid between a cable and network show. From a character point of view and pushing the boundaries I was actually quite surprised. I got a call at one point saying, ‘Push more boundaries.’ So I said, ‘OK.’”

Yost also discussed the transition from working on cable shows like FX’s “Justified” to “Sneaky Pete” for Amazon’s streaming service, something he says he enjoys but also said has its drawbacks.

“When you are binging, it can be a very compelling, fun weekend, but it’s over just like that,” he said. “And you might miss out on a lot of dialogue that goes on between the viewers. The fantasy that we have in our heads is that people are talking about our shows. That’s what we want, to hit that nerve. To have the opportunity not just to entertain them but if you’re lucky, on a good night, to move them, to provoke them and get them to talk to each other.”