Continue to Variety SKIP AD
You will be redirected back to your article in seconds
Sep 18, 2017 6:59pm PT 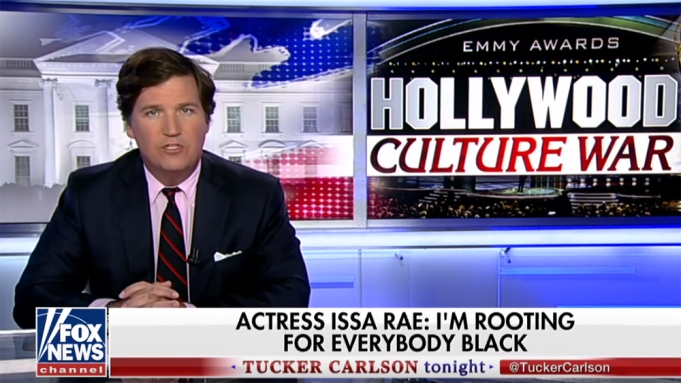 Diversity may have scored several big wins at Sunday night’s Emmys, but Issa Rae’s comment ahead of the show that she’s “rooting for everybody black” is raising some eyebrows — at least, those of Fox News host Tucker Carlson.

Rae made the comment to Variety on the red carpet Sunday night. Carlson, on his Fox News show “Tucker Carlson Tonight,” began a segment lambasting the politics of the Emmys by taking aim at the “Insecure” star’s comments.

After showing the clip of Rae, followed by a video of “Atlanta” mastermind Donald Glover jokingly thanking President Donald Trump for “making black people number one on the most-oppressed list” while accepting the Emmy for comedy actor, Carlson criticized both of them. “Those comments didn’t seem to raise an eyebrow, but of course they didn’t. It’s 2017, and so we’re used to open race hostility from the left,” he said.

“The entire show was like that,” he went on. “It came closer to political indoctrination than entertainment.”

He then went on to slam the rest of the show’s political comments, but circled back to Rae later as he talked with guest Wendy Osefo, who defended Rae’s statement. “She’s saying that she wants to see individuals win and have a diverse background when it comes to Emmys. And yesterday, we saw that,” she said.

But Carlson maintained that Rae’s comment was the “opposite” of encouraging diversity.

“I just think it’s a divisive habit of thought,” he added. “I think looking at the world like that gets you to civil war, actually. I think you should look at people first as individuals. What did this person do? What does he believe? What has he achieved? And as soon as you see people as indistinguishable from their anybody else in their same group, that’s when you really start hating each other.”

For her part, Rae issued a simple response to one of her critics on social media Sunday night. Retweeting one woman who called her a “racist” for her comment, Rae replied simply “Sure, Jan,” referencing the popular “Brady Bunch”-inspired meme.

Variety has reached out to Rae for comment. Watch video of Carlson’s segment above.