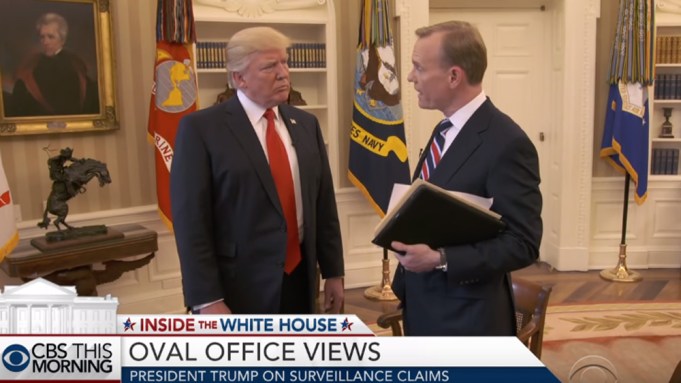 President Donald Trump cut an interview with CBS anchor John Dickerson short after being asked about his claim that former President Barack Obama wiretapped his campaign.

Dickerson pressed Trump on claims the president made — with no evidence — back in March that Obama had wiretapped Trump Tower, claims that intelligence community officials, Obama aides, and even prominent Republican lawmakers have disputed.

“Surveillance of our citizens, I think that is a very big topic, and it’s a topic that should be number one, and we should find out what the hell is going on,” Trump began.

“I just wanted to find out — you’re the President of the United States — you said he was ‘sick’ and ‘bad,'” Dickerson responded.

“You can take it any way you want,” Trump said.

The “Face the Nation” host then pressed the president. “I’m asking you because you don’t want it to be fake news. I want to hear it from President Trump.”

Dickerson replied, “But I want to know your opinions. You’re the president of the United States.”

“That’s enough,” Trump said, walking away from Dickerson and sitting down at the Oval Office desk. “Thank you. Thank you very much.”

Following the interview, CBS anchor Gayle King asked Dickerson if he was escorted out of the Oval Office.

“I think it was pretty clear that I was to escort myself out, or I would be escorted out, I would be moved along,” he said. “It was time for our conversation to be over.”