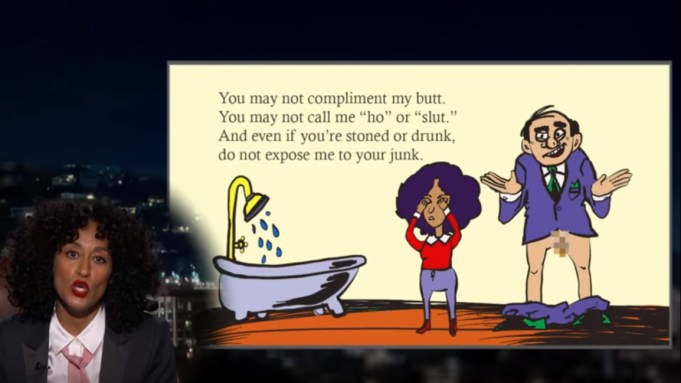 “Black-ish” star Tracee Ellis Ross channeled Dr. Seuss with her book “The Handsy Man” while filling in for Jimmy Kimmel on Tuesday night — Kimmel was staying home to take care of his infant son post-surgery.

Ross kicked off the segment with a quick introduction that characterized the Hollywood sexual harassment scandal: “It isn’t a sex scandal, it isn’t a Hollywood scandal, it isn’t even a scandal. It is a systemic problem about the abuse of power that takes place across all industries.” She segued into her “children’s book for men,” explaining that although she wasn’t surprised by many of the stories of sexual harassment that came to light, evidently many men were, so she wrote a book to help them understand.

“There is a guy with ten long fingers, creepy glares, and hugs that linger. If you’re a woman, you’re not a fan. I speak, of course, of the Handsy Man,” she began, before launching into a rhyming list of things men “may not do.”

“You may not compliment my butt. You may not call me ‘ho’ or ‘slut.’ And even if you’re stoned or drunk, you may not expose me to your junk.” Illustrated picture book-style pages showed on the screen behind Ross as she read.

“I shouldn’t have to say this crap!” ended one stanza — “crap” rhyming with “lap” — accompanied by cheers from the audience.

“So Handsy Man, if you’re still confused whether your behavior will be excused, I’ll say it clearly, nice and slow: If she doesn’t consent, the answer is no.”