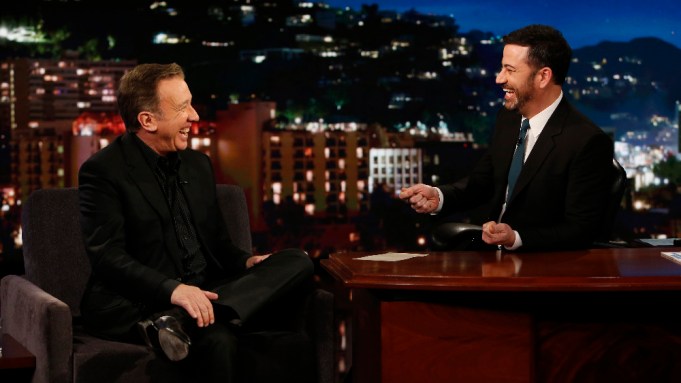 Tim Allen wouldn’t be the first to accuse Hollywood of shunning conservatives, but his latest comparison may have taken it a bit too far.

In an appearance on “Jimmy Kimmel Live!” on Friday, Kimmel asked Allen if he went to President Donald Trump’s inauguration. Allen, who plays an outspoken conservative on “Last Man Standing” and has been open about his right-wing political beliefs, stammered and answered, “I was invited, we did a VIP thing for the vets, and went to a veterans ball, so I went to go see Democrats and Republicans.”

“Yeah I went to the inauguration,” he said. The comedian got somewhat defensive in his response, prompting Kimmel to say, “I’m not attacking you!”

“You gotta be real careful around here, you know,” Allen said. “You’ll get beat up if you don’t believe what everybody believes. It’s like ’30s Germany.”

His analogy provoked backlash on social media, but it’s not the first time Allen has sparked controversy due to his political comments. He’s previously made headlines for saying Bill and Hillary Clinton “are like herpes,” among other controversial statements.

Allen has also previously spoken out against how he believes Hollywood treats conservatives. In an interview with Megyn Kelly on Fox News, Allen said, “What I find odd about Hollywood is they didn’t like Trump because he was a bully. But if you had any kind of inkling that you were for Trump, you got bullied.”