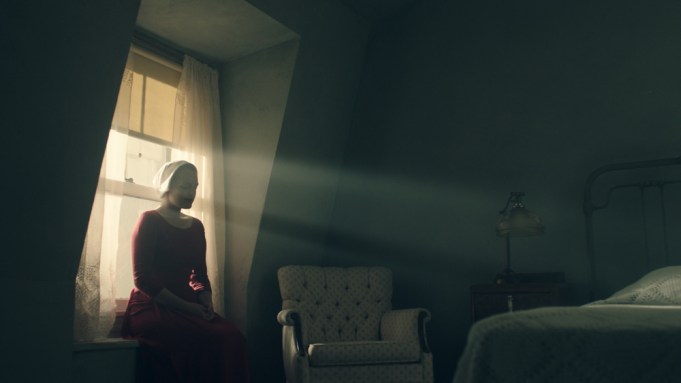 Amid the usual betting (legal and illegal) on Super Bowl Sunday comes a different kind of bet from Hulu: a Super Bowl commercial for its upcoming dystopian series “The Handmaid’s Tale,” starring Elisabeth Moss, Samira Wiley, Alexis Bledel, Yvonne Strahovski, Joseph Fiennes, and plenty of other actors you enjoy seeing on your screen.

Hulu has released the spot early; you can watch it above or on YouTube.

“The Handmaid’s Tale,” based on the 1985 Margaret Atwood novel of the same name, takes place in a nightmare world in which women are little more than baby factories, servants, or trophy wives. The 30-second spot elegantly reveals this world, a theocracy where women no longer have names — instead, they are referred to as “Offred,” “Ofglen,” “Ofcharles,” property of the Commanders who are using them to bear children because their barren wives cannot.

Elisabeth Moss is Offred, our protagonist. She had a husband, a child of her own, and a name, before a radical Christian group declared martial law, suspended the Constitution, and began exterminating all other religious and social groups.

While Hulu has been in the original series game for several years at this point, “The Handmaid’s Tale” is the first to get a Super Bowl spot, an investment that goes far beyond just the $5 million that the 30 seconds of airtime costs. The ad will air in the second quarter of the game on Sunday.

“The Handmaid’s Tale,” produced by MGM TV, premieres on Hulu on April 26.