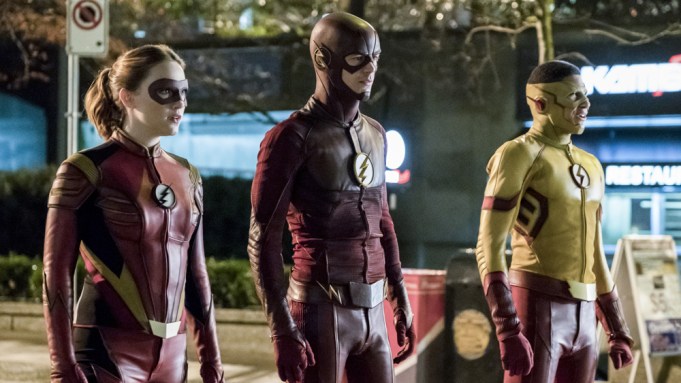 When “The Flash” returns, fans can expect a shift toward a lighter, funnier season.

A new trailer with exclusive footage ran at the top of the panel, which included executive producer Todd Helbing and cast members Kelynan Lonsdale, Jesse L Martin, Candice Patton, Grant Gustin, Tom Cavanagh, Danielle Panabaker, and Carlos Valdes. Amid intermittent shouts of “I love you!” from fans, the cast and Helbing dropped a few hints about the new season.

When we last left Team Flash, ​Barry Allen was trapped inside the speed force and the best team in the business was trying to free him. But at least Panabaker still had a great time filming last year’s darker season, proclaiming, “I loved playing Killer Frost!”

Gustin talked about the episode where he had to act against himself, “This guy Andrew Dunbar acted against me and Tom directed that episode, which made it a lot easier. It wasn’t easy material. It was emotionally charged.” Cavanagh jumped in to praise Gustin, “Grant is a phenomenal actor and when he adds nuances and smaller layers, he brought powerful energies to both characters. Also, he’s very handsome.”

Martin teased that Joe and Cecile’s romance will heat up, “It gets more serious. That’s all I can say.” He also made special mention of “The Flash” musical episode because he was thrilled to work with Victor Garber, “As a New York stage actor, you know what it means to stand next to that dude.” Todd Helbing credited Greg Berlanti’s lifelong love of musicals for inspiring “The Flash” musical episode.

Helbing also announced Danny Trejo is joining the show and the Ballroom 20 crowd let out a huge cheer. Kim Engelbrecht is also joining the show as a new female villain. More teases from Helbing included, “With three Speedsters in a row, this year it’s the fastest man alive against the fastest mind alive. We’re also trying to lighten the tone this year. Last year was pretty dark, we’re going to try to get back to the jokes.”

As for Iris West, look for her to take on an even bigger role in Season 4. Candice Patton was very clear about Iris being “A boss lady at Team Flash. Iris is devastated Barry is gone into the speed force. In Season 4, Iris steps up as the leader of Team Flash.”

“The Flash” returns Oct. 10 on The CW. The trailer can be viewed above.