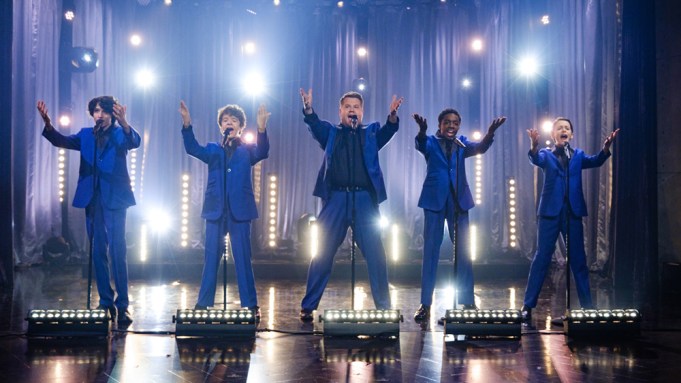 The catchy synth soundtrack and nostalgic ’80s tunes helped make Netflix’s “Stranger Things” a hit among viewers, but who knew its young stars could nail a Motown medley?

Finn Wolfhard, Gaten Matarazzo, Caleb McLaughlin, and Noah Schnapp appeared on “The Late Late Show With James Corden” in a mockumentary which revealed that prior to being television stars, the boys were part of a Motown cover band with Corden called “The Upside Downs.” The sketch concluded with a medley performance by the quintet who sang “I Want You Back” by the Jackson Five, “My Girl” from the Temptations, and “I’ll Be There” from the Four Tops.

In the skit, the group details the band’s history and how “some people thought it was weird that James hung out with us because he’s an adult, but we actually went to school with him,” Wolfhard said. “You know, he was held back a couple of years, but we were in the same grade.” The band eventually caught the attention of a Netflix executive who invited them to audition for the show. All the boys landed their roles, with the exception of Corden who ended up “wearing a suit and sitting behind a desk wasting [his] life,” although McLaughlin called the band “the most creatively fulfilling thing I’ve ever been a part of.”

Millie Bobby Brown, who also stars in “Stranger Things” as the telekinetic Eleven, recently appeared on “The Tonight Show With Jimmy Fallon” where she demonstrated her own musical skills by performing a rap recap of Season 1 of “Stranger Things.”

Watch the video here or above. The performance begins at the 3:23 mark.