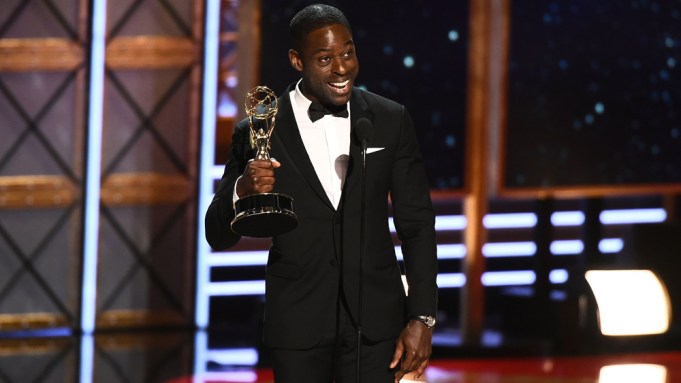 Sterling K. Brown made history on Sunday night, becoming the first African American to win best actor at the Emmys in 19 years for his emotional performance in NBC’s “This Is Us.” But then his acceptance speech was unceremoniously cut off during CBS’ live telecast.

“You can play. You can play,” he said to the Emmys’ house band. “Nobody got that loud music.”

After his mic was turned off, the 41 year-old actor tried to finish his speech to the cheers of the Microsoft Theater audience, but the attempt proved unsuccessful.

When asked by a reporter backstage if he’d like to finish his acceptance speech, the 41 year-old actor happily obliged.

“You know what? I wouldn’t mind finishing, thank you for the invitation,” he said.

“I wanted to thank our writers,” the actor began. “A show doesn’t get seven acting nominations without some impeccable, beautiful, thoughtful writing. You guys are our life’s blood, so I want to thank you so much. To our producers and directors, in particular, John Requa, Glenn Ficarra, and the crazy cool Ken Olin. I thank you for your guidance and friendship. And I wanted to thank Dan Fogelman — he is the Hebrew hammer with which our house is built. He makes me laugh and cry in equal parts and keeps me coming back for more, and in his own little small special way he’s not trying to make America great again, he’s trying to make it the best that it’s ever been, and I love him for taking me on this journey with him. I wanted to thank my manager of 17 years, Jennifer Wiley-Stockton. We’ve been doing this for a long time, and it feels like we’re just getting started. I can’t wait to see what’s next. And to my wife — they cut me off before I got to thank my wife, man! Ryan Michelle Bathe, you’re everything. You make my life worth living and you gave me two of the most beautiful things that God has ever put on this planet: my sons. Andrew Jason Sterling Brown, Amari Michael Christian Brown, your daddy loves you with the strength of 1000 suns. I’ll see you Monday after work. Thank you.”