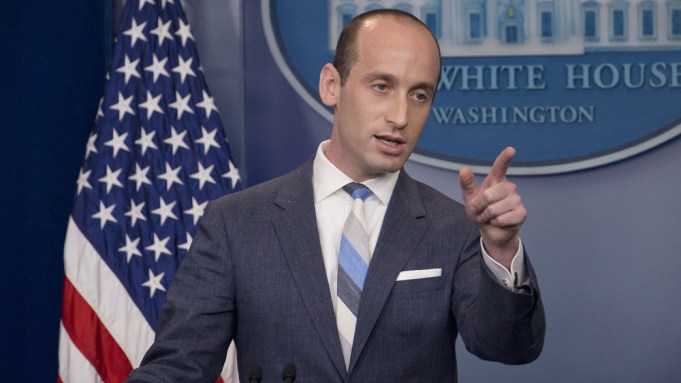 In the latest confrontation between Donald Trump’s administration and members of the press, White House adviser Stephen Miller and CNN reporter Jim Acosta got into a heated exchange during Wednesday’s press briefing as the two discussed President Trump’s new skills-based immigration system proposal. “That is one of the most outrageous, insulting, ignorant, and foolish things you’ve ever said,” Miller told Acosta during the argument, which is making headlines, after accusing the journalist of having “cosmopolitan bias.”

Acosta began with the quote famously inscribed on the Statue of Liberty before asking if Trump’s new proposal aligned with U.S. traditions. “The Statue of Liberty says ‘Give me your tired, your poor, your huddled masses yearning to breathe free,'” he recited. “It doesn’t say anything about speaking English or being able to be a computer programmer.”

He continued, “Aren’t you trying to change what it means to be an immigrant coming into this country if you’re telling them you have to speak English? Can’t people learn how to speak English when they get here?” To which Miller asserted that the notion that “speaking English wouldn’t be a part of our immigration systems would be very ahistorical.”

As Miller disputed the origins of the poem on the original Statue of Liberty, Acosta, who mentioned he is the son of a Cuban immigrant, interjected, saying, “The Statue of Liberty has always been a beacon of hope to the world for people to send their people to this country. They’re not always going to speak English, Stephen. They’re not always going to be highly skilled.”

When Acosta brought up Trump’s proposed wall along the southern border to ban immigration, Miller prodded, “Do you really at CNN not know the difference between green card policy and illegal immigration?”

Acosta then repeated his original question about whether immigrants would have to speak English before coming to the U.S., asking “Are we just going to bring in people from Great Britain and Australia?”

Rather than addressing the question, Miller called Acosta’s comments offensive. “I am shocked at your statement, that you think only people from Great Britain and Australia would know English,” he said. “It reveals your cosmopolitan bias to a shocking degree. This is an amazing moment. That you think only people from Great Britain or Australia would speak English is so insulting to millions of hard-working immigrants who do speak English from all over the world. Jim, have you honestly never met an immigrant from another country who speaks English, outside of Great Britain and Australia? Is that your personal experience?”

“That is one of the most outrageous, insulting, ignorant, and foolish things you’ve ever said,” he continued. “The notion that you think that this is a racist bill is so wrong and so insulting.”

Miller concluded the debate by defending the White House’s proposed green card policy. “Insinuations like Jim made, trying to ascribe nefarious motives to a compassionate immigration measure designed to help newcomers and current arrivals alike, is wrong,” he said.