Stephen Colbert Reacts to Trump Calling Him ‘a No-Talent Guy’ 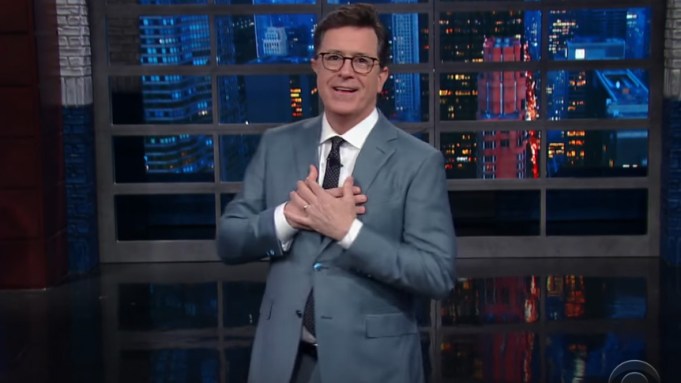 It’s been a long time coming, but Donald Trump finally said the magic words Stephen Colbert has been waiting for: his name.

In an interview published by Time magazine on Thursday, President Trump directly called out the late night host, calling him a “no-talent guy.” He added, “There’s nothing funny about what he says. And what he says is filthy. And you have kids watching. And it only builds up my base. It only helps me, people like him.”

Colbert’s newly improved ratings? Trump took credit for those, too. “The guy was dying. By the way, they were going to take him off television. Then he started attacking me and he started doing better. But his show was dying. I’ve done his show. …But when I did his show, which by the way was very highly rated. It was high — highest rating. The highest rating he’s ever had.”

Colbert read Trump’s statement to his audience during Thursday night’s broadcast of “The Late Show,” using his best impression of Trump’s voice. After reading the comments, Colbert said, “The President of the United States has personally come after me and my show, and there’s only one thing to say.” His response was a one-word answer, paired with clapping, maniacal laughter, and sealed with a blown kiss: “Yayyy!”

The way Colbert sees it, Trump’s ridicule is a complete win. “Don’t you know I’ve been trying for a year to get you to say my name?” Colbert posed to Trump. “And you were admirably restrained, but now you did it. I won.”

The late night host didn’t forget to mention the President’s own ratings.

“You know who’s got really bad ratings these days — you do,” he said. “Terrible approval numbers, I hear they’re thinking about switching your time slot with Mike Pence.”

But Colbert suggested there’s only one obvious way that the President can take Colbert down: resign.

“If you did that, sir, what would I talk about then?” Colbert asked. “Except your resignation, because that’d be fun.”