Continue to Variety SKIP AD
You will be redirected back to your article in seconds
Apr 4, 2017 11:28am PT 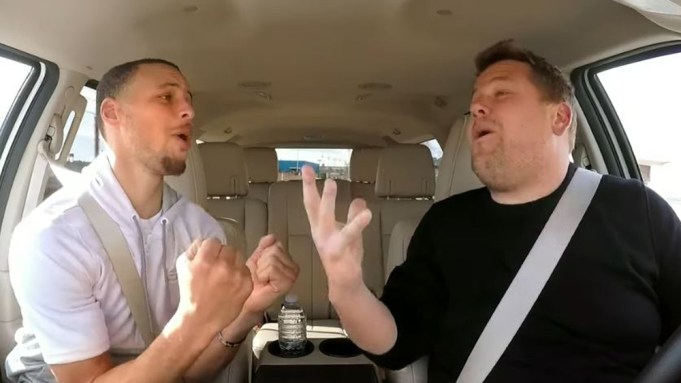 Viewers were in for a surprise on Monday night’s episode of “The Late Late Show with James Corden,” as Corden deviated from the usual rules surrounding his viral “Carpool Karaoke” segment and allowed Golden State Warriors point guard and non-professional singer Stephen Curry to belt out some Disney lyrics.

The segment featured Corden acting as Curry’s life coach for an afternoon, which began with an intricate handshake and the perfect game to disperse life advice — golf.

Unbeknownst to Curry, the pair were actually set to play mini-golf, and he ended up beating Corden 77-59, prompting Corden to move on to air hockey in an attempt to best Curry at something. However, Corden found little success there as well, as Curry slammed puck after puck past him. Curry also guessed the number Corden was thinking of and proved to be an adept dancer before they left the arcade.

On the way back to the hotel, Curry said he had been dreaming of participating in the “Carpool Karaoke” segment and since he said he listens to all the same music as his 4 1/2-year old daughter Riley, Corden put on some Disney tunes. Curry began with Moana’s “How Far I’ll Go,” complete with mouth guards. The pair transitioned to the “Frozen” duet “Love Is an Open Door,” with Corden as Ana and Curry as Hans. Curry hit all the interjections and even made most of the harmonies before the segment ended in a mock marriage proposal.

Check out the hilarious clip here or above.