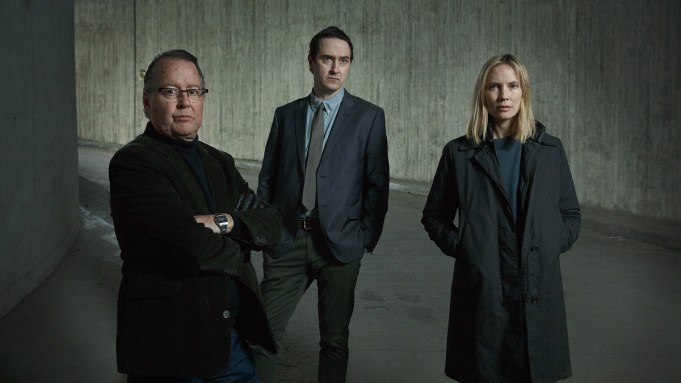 “Jordskott” Season 2, which will premiere on Shudder in the US and Canada on Jan. 18, sees the return of tough police detective Eva Thornblad (Moa Gammel) in the Nordic noir series. Eva returns to her old job in Stockholm in an attempt to put the haunting events that occurred in Silverhojd behind her and begin a new chapter. However, the discovery of a mutilated corpse floating beneath the ice of a suburban lake leads her to believe she is not yet done with her past. The series is distributed by ITV Studios Global Entertainment.

“Black Lake” will premiere on Shudder on Dec. 21 in the US, Canada, UK, Ireland, Germany and Austria. It was the most viewed series when broadcast on MTG’s free-TV channel TV3 in 2016. The series tells the mysterious tale of Black Lake, a remote and neglected ski resort which has been closed for years, having been the scene of a horrific crime years prior. Johan (Filip Berg) invites his friends to the abandoned resort, with an idea of reopening it. They are soon gripped by fear, as a series of disturbing events lead to danger, questions on who can be trusted, and ultimately who will survive. The series is produced by Jarowskij, a Banijay Group company.

“With a passion for genre across provocative thrillers, suspense entertainment and horror, we’re delighted to expand Shudder’s offering of compelling foreign language genre series,” said Aurelie de Troyer, Shudder’s vice president of global acquisitions and co-productions. “Following its huge success in Sweden, ‘Black Lake’ takes a fresh and ingenious approach to Scandi Noir, while ‘Jordskott’ offers an alternative take on the crime drama phenomenon with a captivating second season. The Shudder team is excited to bring these two fantastic series to our members.”

Shudder has debuted multiple international genre series throughout 2017, including the three-part French series, “Beyond the Walls,” the German series “The Valley,”and “Missions,” an award-winning sci-fi supernatural French and English series. Shudder will also co-produce Season 2 of “Missions,” due to air in 2018.