Seth Meyers Tackles Matt Lauer Firing: ‘You Killed Your Career and You F—ed Yourself’ 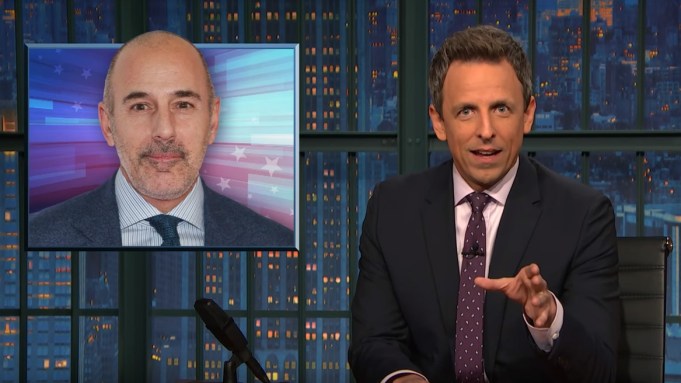 Meyers began by airing a few newsreels detailing the circumstances of Lauer’s dismissal, including the fact that the complaint received by NBC took place during the 2014 Sochi Olympics.

“And you thought the most disgusting thing at the Sochi Olympics was Bob Costa’s pinkeye,” Meyers joked. “Well, move over, pinkeye, there’s a new, grosser sheriff in town.”

Meyers went on to comment on the implication that, as Lauer was arguably NBC’s biggest money-maker, the allegations against him must have been severe for the network to fire him. He aired an interview with Bill O’Reilly that Lauer conducted after O’Reilly was fired from Fox News for sexual harassment allegations in which Lauer came to a similar conclusion.

“He was talking to Bill O’Reilly, but he could have just as easily been talking to a mirror,” Meyers said.

Meyers then quoted Variety‘s story reporting further allegations of improper behavior by Lauer, including the accusation that he gave a co-worker a sex toy with a note detailing how he wanted to use it on her.

“I don’t know who you said you’d marry in those conversations, but I do know that you killed your career, and you f—ed yourself.”

Meyers could not comment on Lauer’s dismissal during Wednesday night’s episode because it was already pre-taped.