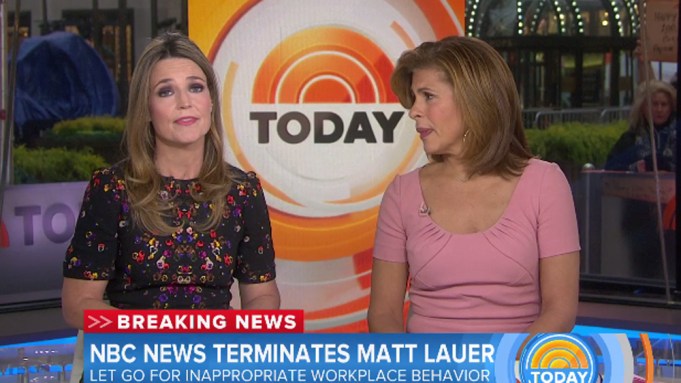 Savannah Guthrie fought back tears on Wednesday’s segment of NBC’s “Today” show while announcing that her co-host Matt Lauer had been fired from NBC News for “inappropriate sexual behavior in the workplace.”

Guthrie was openly emotional as she told viewers she had learned the news mere moments before reporting it live on air. Joined by co-host Hoda Kotb, Guthrie read a statement from NBC News chairman Andy Lack, who ensured that NBC will continue to report on the matter in a transparent manner.

“As I’m sure you can imagine, we are devastated, and we are still processing all of this. And I will tell you right now, we do not know more than what I just shared with you,” Guthrie said. “But we will be covering this story as reporters, as journalists. I’m sure we will be learning more details in the hours and days to come, and we promise we will share that with you.”

She went on, “All we can say is that we are heartbroken. I’m heartbroken for Matt — he is my dear, dear friend and my partner. And he is beloved by many many people here. And I’m heartbroken for the brave colleague who came forward to tell her story, and any other women who have their own stories to tell.”

“We are grappling with a dilemma that so many people have faced these past few weeks. How do you reconcile your love for someone with the revelation that they have behaved badly? And I don’t know the answer to that,” she added.

Kotb said they are still making sense of the allegations.

“This is a very tough morning for both of us,” Kotb said. “I’ve known Matt for 15 years, and I’ve loved him as a friend and as a colleague, and again just like you were saying Savannah, it’s hard to reconcile what we are hearing with the man who we know. Who walks in this building every single day.”