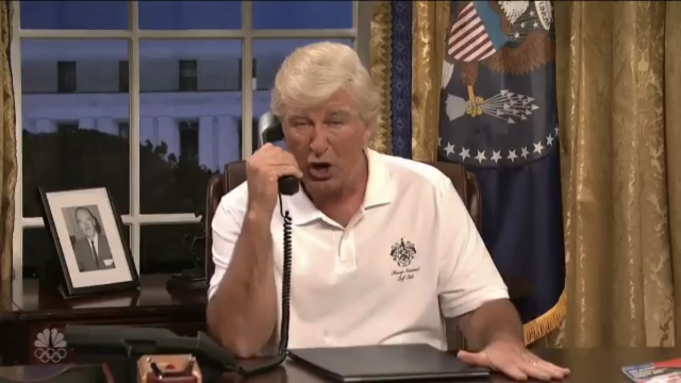 “Saturday Night Live” returned for its 43rd season after a record 22 Emmy nominations (and nine wins) on Saturday and it wasted no time getting right back down to politics with Alec Baldwin’s President Donald Trump showing confusion over Puerto Rico as a U.S. territory.

The cold open sketch, which was set in the Oval Office, saw Baldwin’s Trump decked out in his golfing finest as he takes a call from Mayor Carmen Yulin Cruz of San Juan, Puerto Rico (portrayed by Melissa Villaseñor). When she asked for help in the wake of Hurricane Maria, he responded, “It’s a big ocean, water, with fishies and bubbles and turtles that bite. We want to help you, but we have to take care of America first.”

“You do know we’re a U.S. territory, don’t you?,” Villaseñor’s Cruz said. Consumed with shock, Baldwin’s Trump retorted, “I mean, I do, but not many people know that, no.”

This was, of course, a direct play on President Trump’s speech on tax reform delivered earlier this week, when he defended his administration’s response to the recent hurricane in Puerto Rico by literally saying, “This is an island surrounded by water, big water, ocean water.” The show later called out this moment again during “Weekend Update.”

The “SNL” sketch also featured Aidy Bryant as Sarah Huckabee Sanders, with jokes about how many other administration employees she has outlasted, as well as how she handled the NFL “scandal.” Kate McKinnon appeared as Jeff Sessions, commenting on Sessions’ loyalty, and Alex Moffatt was Chuck Schumer, who has been said to be working on a “secret deal” with Trump. The sketch didn’t comment on what that deal is, but it did draw comparisons between the men as New Yorkers.

After the cold open, though, the show took a detour from hot topics of today to see host Ryan Gosling and special guest Emma Stone sending up their hit film “La La Land” by joking about who really saved jazz in the monologue, while other sketches of the night included a return to McKinnon’s Ms. Rafferty with “Another Close Encounter,” as well as a parody of HGTV renovation shows and a font-filled journey into “Avatar.”