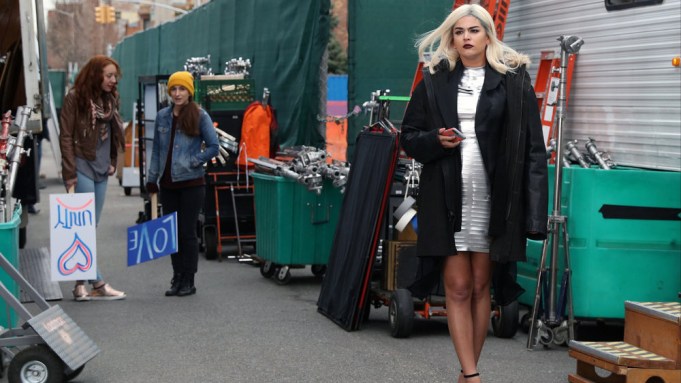 Just how did that controversial Pepsi ad starring Kendall Jenner even get made? “Saturday Night Live” attempted to answer that question with a behind-the-scenes spoof on this week’s episode.

Cast member Beck Bennett stars as the commercial’s director, who’s excited to be on the job and confident in his vision. That is, however, until he tries to describe the concept to his sister over the phone, which makes him question the whole premise.

“It’s an homage to the resistance,” he says. “There’s this huge protest in the street, reminiscent of Black Lives Matter. Everybody is marching and they get to these police officers and you think it’s going to go bad because there’s kind of a standoff, and then Kendall Jenner walks in. She walks up to one of the police officers and hands him a Pepsi. That Pepsi brings everyone together.”

Though we can’t hear her, his sister clearly shoots it down, so he tries to get a second opinion. “Sort of tone deaf?” he asks someone else on the phone. Though he insists it’s a tribute to the protests and all the cultures represented, as he starts to get it, he says, “Oh, we’re just using them… to sell soda?”

Cecily Strong plays Jenner in the sketch, who can be seen walking from her trailer and describing the commercial to a friend on the phone. “Um, I stop the police from shooting people by handling them a Pepsi,” she says. “I know. It’s cute, right?”

Pepsi pulled the ad earlier this week after facing a torrent of backlash on social media, with critics calling it tone-deaf and insensitive. In a statement at the time, Pepsi admitted that it “missed the mark” with the spot.