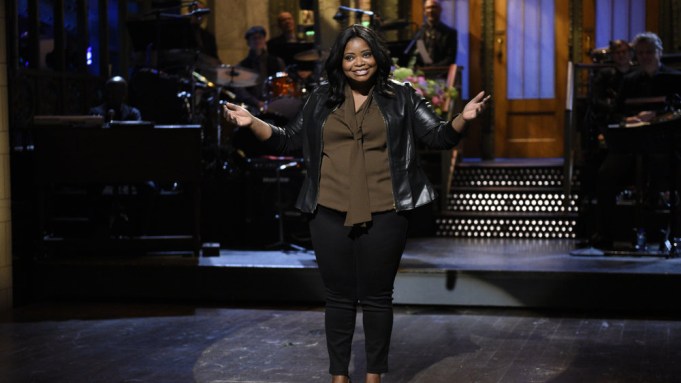 Of course, President Trump and his administration were also targets of skewering as the NBC late-night mainstay returned with a new episode after a two-week break.

“SNL’s” cold open featured a “Forrest Gump” spoof with Kate McKinnon as embattled Attorney General Jeff Sessions in the guise of Gump discussing his “bad week.” The former Alabama senator is battling accusations that he was less than truthful during his confirmation hearings about his contacts with Russian officials during Trump’s presidential campaign. McKinnon’s Sessions noted that the growing controversy over perjury allegations distracted from the positive coverage of Trump’s address to Congress on Tuesday night, when the President spoke “real words in a row for a whole hour.”

Sitting on the bus bench with a box of chocolates in his lap, McKinnon’s Sessions told his aw-shucks story to a series of characters including Beck Bennett’s Vladimir Putin before Spencer joined him in her Oscar-winning role of housemaid Minny Jackson.

“I’m from a different movie,” Spencer said before handing a giddy Sessions a chocolate pie, a reference to a disgustingly defiant act by her “Help” character.

Spencer’s monologue made only an oblique reference to the debacle at Sunday’s Oscar ceremony, when “La La Land” was mistakenly named best picture before “Moonlight” was rightfully handed the trophy.

Spencer had more fun with the fact that her most recent pic, “Hidden Figures,” was often referred to incorrectly during awards season in a mix-up with the Denzel Washington-Viola Davis starrer “Fences.”

“There were three black movies at the Oscars this year — that’s a lot for America,” Spencer joked of the “Hidden Fences” flubs. The solution, she said, was to produce a three-way mashup of the best picture nominees with prominent African-American roles: “Hidden Fences Light,” which could be billed as “the story of three black women who send an introspective gay guy to build a fence on the moon,” Spencer said.

Spencer’s monologue was followed by a faux movie trailer that took direct aim at Trump and the Republican Party. “TBD” was pitched with classic overblown movie-trailer narration as a stirring biopic of the one Republican willing to speak out against the President’s agenda — as soon that person emerges. The final slate read “Courage. Compassion. Country. The TBD Story” as the narrator added, “starring Bradley Whitford, probably.”

"One Republican decided enough was enough."
"A man by the name of… TBD."#SNL pic.twitter.com/iAmSweYtvG