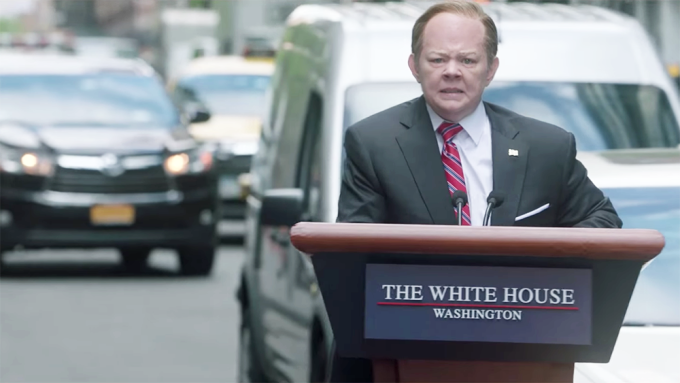 The only thing better than Melissa McCarthy’s “Saturday Night Live” spoof of White House press secretary Sean Spicer? Getting a behind-the-scenes view of her epic portrayal.

“SNL” released hilarious outtakes of McCarthy parading through the streets of New York in full “Spicey” attire, including the signature motorized podium, as he searches for President Donald Trump.

“The good thing is nobody knows we’re shooting. I mean, this has definitely stayed under cover,” McCarthy jokes as crowds form and onlookers yell to get her attention in the streets.

Spectators shout both “Hey Melissa!” and “Spicey!” as she barrels down the streets and yelps at nearby drivers.

“That’s so awesome,” McCarthy says out of character as she looks up to see people gathering to watch her through office building windows.

The outtakes follow her desperate attempts to track Trump’s whereabouts.

“Trump! Where are you? I know this is where you really live!” she shouts as her podium rides up to Trump Tower in Manhattan.

The original sketch, which aired when McCarthy hosted on May 13, followed McCarthy-as-Spicer looking to confront Trump about rumors of being replaced by Sarah Huckabee Sanders.

In the bloopers video, McCarthy grows irritable as her quest to find Trump remains unsuccessful. But Spicey always has a plan: “I just need a couple minutes in a bush to get it together.”