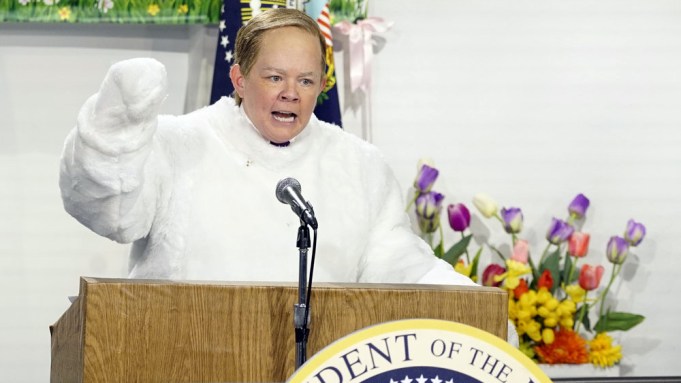 McCarthy came out in a bunny suit, a reference to Spicer having played the Easter Bunny at one of the White House’s Easter Egg Roll events during the George W. Bush administration.

Spicer shocked the White House press corps and others during a briefing on April 11 while discussing President Trump’s decision to launch air strikes on Syria in response to President Bashar al-Assad’s use of chemical weapons on Syrian civilians.

Spicer stated that even Hitler didn’t resort to using chemical weapons on his own people — a comment that drew immediate corrections and a storm of criticism for insensitivity and lack of knowledge of the Holocaust. To make matters worse, Spicer’s comment came on Passover. He later apologized for the verbal debacle in an interview with CNN.

McCarthy’s Spicer delivered a belligerent apology from a podium, but also berated the press for inflating the incident. “If you guys didn’t focus on every little slur and lie I said,” she said.

The sketch ends with Spicer driving an egg-shaped golf cart over his podium, right after he blurts out: “By the way the President’s probably going to bomb North Korea tonight.”

Check out McCarthy as Spicer here or watch the video above.