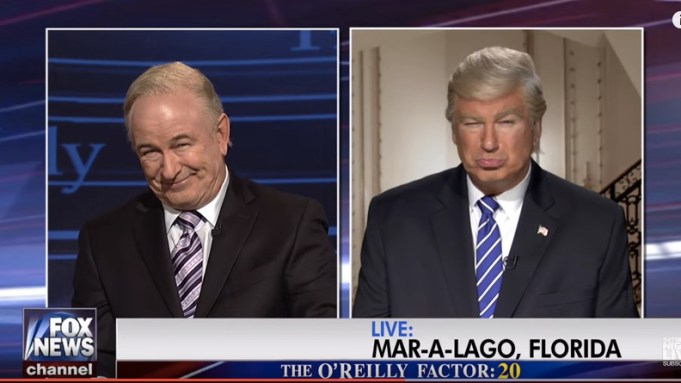 In doing so, Baldwin created the effect of being on screen twice, a feat one suspects was accomplished by taping one of the performances ahead of time. The show employed this technique in the past, when Dana Carvey would play both President George H.W. Bush and presidential candidate Ross Perot during debate sketches.

Fox News Channel has seen dozens of advertisers seek to move their commercials out of O’Reilly’s highly-watched program in the wake of a New York Times report detailing  payments made to women who levied allegations of inappropriate behavior at the anchor, who has said in a recent statement that he had been a target, but had never been the subject of any complaints made to Fox News’ Human Resources department. Baldwin scored laughs by telling ersatz “Factor” viewers the show still had a few reliable sponsors, like  “Dog Cocaine.”

Baldwin also reprised his popular impression of the President in the show’s “cold open,” in which the fake Commander-in-Chief appeared at a meeting in a rural Kentucky town. At a town hall meeting, he tried to elicit support for the recent U.S. missile strike against Syria while telling attendees his administration would cut many government services and benefits upon which they rely.

Another standout sketch poked fun at the recent controversy surrounding Pepsi’s latest commercial, which was pulled within a day of going on the air. In a taped segment, Beck Bennett played a writer who calls friends from the set of the commercial shoot to tell them about the concept – only to learn it’s offensive to people from many backgrounds.

Next week, the show will air live  from coast to coast, and will do so for the season’s last four episodes. Jimmy Fallon will host next week.