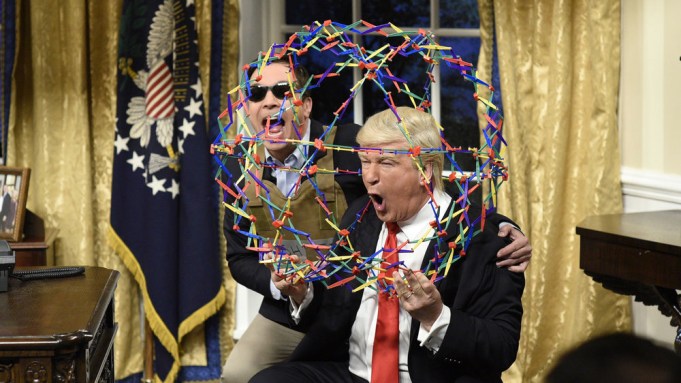 Alec Baldwin was back as President Trump in “Saturday Night Live’s” cold open, which included an appearance by host Jimmy Fallon as Trump advisor and son-in-law Jared Kushner.

The sketch opened with Baldwin sitting at a desk going over his list of accomplishments as president to date with Vice President Mike Pence, played by Beck Bennett.

“Have you seen my tweets on North Korea? This could all be over by Monday,” Trump says after Pence reminds him he has more than 1,300 days to go in his presidency.

The sketch poked fun at recent headlines about infighting among Kushner and Trump’s chief strategist Steve Bannon. Trump summoned the two for an “Apprentice”-style elimination segment. The Bannon character was dressed as the Grim Reaper, complete with skeletal mask. Fallon’s Kushner wore a flak jacket and sunglasses. He smiled a lot but didn’t say anything, even when Trump prodded him to deliver the signature “live from New York, it’s Saturday night” intro.

Bannon, of course, is the one banished. Trump tells him to “join Kellyanne Conway the basement.” But then he adds: “You get to come back at the end of all this and help send me to prison.”

Tonight’s episode of “SNL” marks the first time in the show’s 42-year history that it is airing live in all time zones. Fallon followed the opening sketch with a high-energy segment that traded the traditional monologue for a performance of David Bowie’s “Let’s Dance” that featured Fallon and a group of dancers moving through the hall outside Studio 8-H and the backstage area.